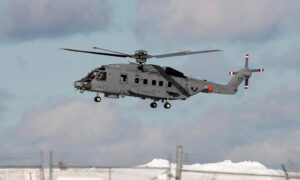 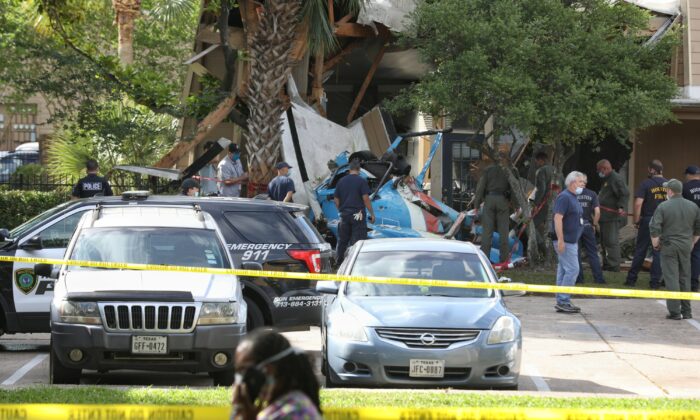 Authorities investigate the scene of a helicopter crash at an apartment complex in Houston on May 2, 2020. (Jon Shapley/Houston Chronicle via AP)
US News

The pilot was still in surgery, Acevedo said, and was “very banged up” but police were hopeful he would survive.

“We don’t have any idea why it went down at this time,” Acevedo said at the first press conference near the north Houston crash scene, and reiterated that later in the morning.

There were no injuries to anyone on the ground at the apartment complex, a masked Acevedo told reporters.

The helicopter was supposed to assist with a search for bodies in a nearby bayou, which was prompted by a tip that the police chief characterized as “probably a bogus call—we don’t know.”

The officers were trapped in “mangled” wreckage before being cut out by city firefighters who worked for about an hour, Acevedo said, praising the fire department as “phenomenal.”

Acevedo identified two silver linings at the first press conference: While the wreckage was “pretty significant,” it didn’t catch fire, and the helicopter avoided striking occupied apartment buildings. It did clip the Biscayne at Cityview complex’s clubhouse, he said.

The department will not release the names of the officers until their extended families are made aware, Acevedo said. The tactical flight officer was survived by a wife and two young children, who were at the hospital along with the officer’s parents and in-laws, Acevedo said.

The police department is shutting down flights until it has a chance to reassess in the coming days, and will be relying on the Texas Department of Public Safety and Harris County Sheriff’s Office for flight support in the interim.

Acevedo identified the helicopter as “75 Fox.”

“It’s pretty ironic that yesterday we graduated a class and we had Fox fly out because we had COVID, so we couldn’t do your traditional graduation so we wanted to do something special,” Acevedo said. “And if somebody had told me that a few hours later that we had an aircraft down and we’d lose a really good man, I would have said ‘No way.’”

The National Transportation Safety Board and Federal Aviation Administration will investigate, Acevedo said, while the police department conducts a parallel homicide investigation.

“I want to ask the city of Houston to continue to lift up, number one, both families, but especially lift up the family of the police officer who has died this morning,” Turner, also masked, said. “And then at the same time lift up the entire HPD family.”

Acevedo noted that shots rang out across the street from the scene around 3 a.m. Six people were taken into custody, he said, updating the number from three. Acevedo stressed that police had no information indicating the helicopter was taken down by hostile action.