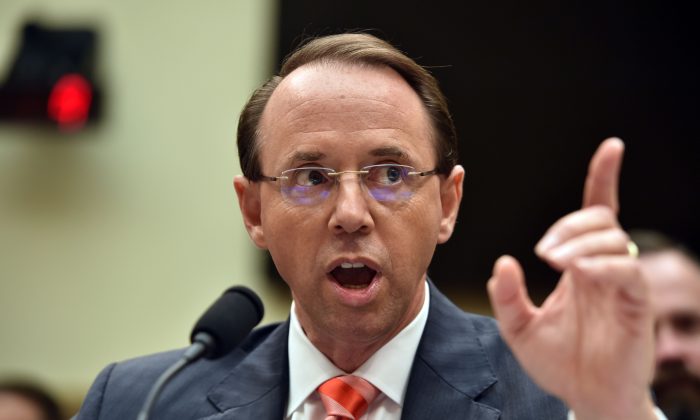 Over a year after the House intelligence committee demanded that the Justice Department (DOJ) hand over documents related to potential abuses of the Foreign Intelligence Surveillance Act, the House voted on June 28 in favor of a resolution demanding that it do so.

Despite numerous requests, including several subpoenas, the DOJ has not provided Congress with all of the documents it has requested.

The requested documents relate to potential violations of the Foreign Intelligence Surveillance Act (FISA) by DOJ personnel as it relates to the Trump campaign as well as related matters.

Earlier this year, it was revealed by the House intelligence committee that the FBI and DOJ had misled the Foreign Intelligence Surveillance Court in obtaining a FISA warrant to spy on Trump campaign volunteer Carter Page.

The court approved the FISA warrant, and under the so-called “two hop rule,” most members of the Trump campaign, including President Donald Trump, also could have been spied on. The rule allows the gathering of data and surveillance of individuals who are “two hops” away from the original target.

The resolution, H.Res.970, passed by a 226-183 vote. The resolution states the DOJ has missed deadlines to produce documents, produced duplicative pages of information, and redacted information from pages to the point where they contained no probative information.

Among the documents requested by the House intelligence and judiciary committees are internal DOJ and FBI communications related to the Trump campaign and the Trump administration.

Text messages obtained by the DOJ inspector general and sent by the lead FBI agent on the Trump campaign case, Peter Strzok, revealed a strong bias by the agent in favor of Hillary Clinton and against Trump. In one message, Strzok, who himself was forced to appear before the House judiciary committee on June 27, had vowed to “stop” Trump from becoming president.

In his testimony, Strzok refused to answer dozens of questions related to the investigation he conducted on the Trump campaign’s alleged collusion with the Russian government, citing advice from the FBI’s counsel not to answer them.

Rep. Jim Jordan (R-Ohio) said on June 28 that among the questions Strzok refused to answer was whether he had met with former British spy Christopher Steele.

Steele was hired by opposition research firm Fusion GPS to produce the so-called “Trump dossier,” which became the basis of the FBI’s FISA application on Carter Page. Fusion GPS was paid by the Clinton campaign and the DNC through law firm Perkins Coie.

The documents withheld by the DOJ may contain more evidence of bias among the top ranks of the DOJ and FBI against Trump. Up to now, sensitive information like that has been withheld from Congress.

During a House judiciary committee hearing on June 28, Rep. Ron DeSantis (R-Fla.) questioned Rosenstein on why one of the clearest examples of Strzok’s bias—the text message about stopping Trump—had been withheld from Congress.

The text message exchange took place between Strzok and FBI lawyer Lisa Page, with whom Strzok was having an affair, on Aug. 8, 2016.

The message was sent just a week after Strzok officially opened the FBI’s counterintelligence investigation into the Trump campaign.

Rosenstein, in turn, did not provide a reason as to why the text was not included in the documents provided to Congress, nor why the inspector general’s staff, separately, had been able to find it. Instead, Rosenstein referred to the fact that vetting text messages is a highly technical process, and said, “We’re not withholding anything embarrassing.”

A report produced by the inspector general on the DOJ’s and FBI’s handling of the investigation into Clinton’s use of a private email server revealed, among other things, that then-FBI Director James Comey had used a private Gmail address to conduct official business.

Earlier this month, emails leaked to the media, revealed that Rosenstein allegedly threatened to subpoena emails and phone records of House representatives and their staffers.

“[Rosenstein] criticized the Committee for sending our [document] requests in writing and was further critical of the Committee’s request to have DOJ/FBI do the same when responding … going so far as to say that if the Committee likes being litigators, then ‘we [DOJ] too [are] litigators, and we will subpoena your records and your emails,’ referring to [House Permanent Select Committee on Intelligence] and Congress overall,” wrote Kash Patel, the committee’s then-senior counsel for counterterrorism, in an email to the Office of General Counsel obtained by Fox News.