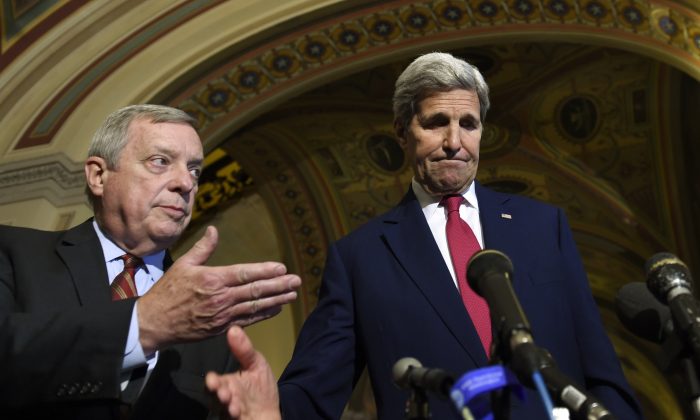 WASHINGTON—Divisions among House Republicans threw scheduled votes against the Iran nuclear accord into disarray Wednesday as other foes, including presidential contender Donald Trump, prepared a big rally outside the Capitol. Democratic front-runner Hillary Rodham Clinton praised the deal in a speech not far away.

The drama unfolded on a day when the presidential campaign was colliding head-on with the congressional debate on the Iran deal, which is strongly backed by the Obama administration and other world powers. It aims to curb Iran’s nuclear program in exchange for billions of dollars in relief from international economic sanctions.

House GOP leaders were forced to delay plans to open debate on a resolution of disapproval as some Republicans threatened to withhold their support. Frustrated that the disapproval resolution looked short of support in the Senate, these Republicans were demanding an alternate approach.

“We need to pull every tool out of the toolbox to stop this bad deal,” said Rep. Bill Flores, R-Texas, leader of a large group of conservatives in the House.

The outcome was uncertain as the surprise disagreement spilled into the open just moments before the House was to come into session to begin debating a procedural measure on the resolution.

“There seems to be some divisions inside the conference,” said Rep. Steve Stivers, R-Ohio.

As the day began, Clinton praised the accord. “Diplomacy is not the pursuit of perfection. It is the balancing of risk,” she said in a speech at the Brookings Institution. Either the deal moves forward, or “we turn down a more dangerous path leading to a far less certain and riskier future.”

At the Capitol, Republican presidential candidates Trump and Ted Cruz and other conservatives, including former Alaska Gov. Sarah Palin, were preparing to headline an anti-deal rally on the lawn.

Inside, debate was beginning in both the House and the Senate, where supporters and the White House were pushing to block passage of a disapproval resolution.

“The other side can roll out their big guns on this if they wish, but frankly I think most members of the Senate Democratic Caucus are not going to be swayed by Mr. Trump, our colleague, Senator Cruz, or even a former vice president,” said the No. 2 Democrat in the Senate, Dick Durbin of Illinois. Former Vice President Dick Cheney has dubbed the deal “madness.”

But Cruz, speaking on the Senate floor, assailed the accord, arguing that “this terrible deal will not stop a virulently anti-American and anti-Israeli regime from getting a nuclear bomb.”

The House, returning from summer recess, was expected to approve the disapproval resolution this week. But in the hours before debate was to begin on a procedural measure setting the terms for discussion and votes, Republicans began objecting. They called for a vote instead on a measure by Rep. Pete Roskam, R-Ill., to delay the proceedings, arguing that the 60-day clock on the congressional review period hasn’t started because lawmakers did not get more information on separate agreements negotiated with Iran by the International Atomic Energy Agency.

The effort was backed by Cruz, who has repeatedly allied himself with House conservatives to thwart the plans of GOP leaders.

Congress has until Sept. 17 — a week from Thursday — to pass a disapproval resolution of the Iran deal, under legislation passed earlier this year giving Congress the right to review the deal. Democrats dismissed the GOP attempts to change the terms of the review period.