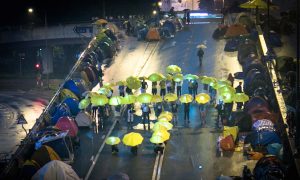 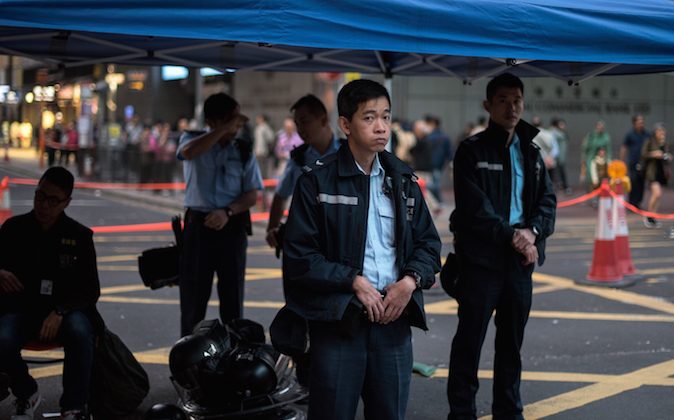 Hong Kong police officers look at a barricade built by pro-democracy protesters in the Mongkok district of Hong Kong on November 19, 2014. Hong Kong police clashed with pro-democracy demonstrators early on November 19 after a small group attempted to break into the city's legislature, with tensions spiking as court-ordered clearances of protest sites get under way. (Alex Ogle/AFP/Getty Images)
China

As police announce the clearing of an area in the Mong Kok protest site, public opinion polls show Hongkongers want the occupation to end.

Steve Hui, chief superintendent at the public relations bureau, said in a press conference on Wednesday that the plaintiffs — two taxi associations and a public mini-bus company — bailiffs, and the police had met earlier that day to discuss the court injunction after the Court of First Instance authorized the police to help execute court orders.

Hui, who is well-liked by the protesters and the public alike for his polite presentation style during televised police updates, urged protesters to comply with the court orders and remove themselves and their personal belongings from the area or face arrest.

Although Hui didn’t give a clearing date at the press conference, saying that bailiffs and the police will only move in after “the relevant parties have finalized the preparations,” RTHK reports that the court orders will be carried out on Tuesday, Nov. 25, citing police sources.

Hong Kong publications report that bailiffs and police could take up to two days to see off protesters and remove barricades from occupied sections of Argyle Street and Nathan Road, but are divided on the size of police support. Ming Pao claims at least 1,500 police officers will be mobilized, while the South China Morning Post says no fewer than 3,000 of Hong Kong’s 28,000-strong police force will be called.

As Mong Kok is the most volatile of the three occupied sites, with a confrontational crowd and a history of violent police-protester confrontations, news that thousands of police officers will be present for the clearing may not be too far-fetched.

Police did not show up in large numbers when the Admiralty court injunction was enforced on Tuesday. In what turned out to be a non-incident, the large media crowd watched as bailiffs and CITIC Tower staff removed barricades while protesters retreated from the area stated in the injunction, but not before taking some metal barricades with them to reinforce other areas.

There was no peaceful end to the day, however. On Tuesday night and Wednesday morning, masked protesters broke a glass door of the Legislative Council building, the first violent action by protesters since the demonstrations started on Sept. 28. Another police-protester fracas ensured, and six protesters were arrested in total.

While the Hong Kong government and the pro-democracy camp have condemned the incident and the unidentified protesters, who many believe are not Occupy protesters, it is unclear how the break-in and its aftermath will affect the Mong Kok protesters, the police, and the public come Tuesday.

In fact, the protesters might not be able to rely on public support anymore in the event of police violence as recent surveys by Hong Kong universities indicate that support for the Occupy movement is waning.

About 67.4 percent of those polled by the Chinese University of Hong Kong feel that the protesters should end their occupation immediately.

The University of Hong Kong also released the results of their own survey on Tuesday, Nov. 18, which found that 83 percent of the 513 polled think that protesters should end the occupation.

Interestingly, 58 percent of those in favor of the occupation ending are between the ages 18 to 29, the age group most likely to support the Umbrella Movement.

About 55 percent of those polled on Monday and Tuesday say that they oppose the Occupy movement, while only 28 percent support it.

Meanwhile, even pro-democracy supporter media mogul Jimmy Lai also thinks that its time for protesters to call it a day.

In an interview with Australian publication The Age, Lai, who shows up at the Admiralty site almost daily to show his support for the student-led Occupy movement, said: “People are getting tired.”

“We cannot exhaust the goodwill of the people, but it doesn’t mean we have to yield.”

“We should retreat when the momentum is there, while our determination and will are strong,” Lai added.

“Then we will be able to come back.”