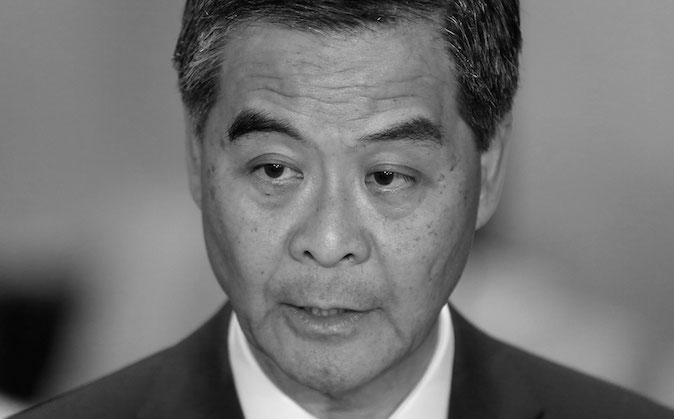 Don’t expect the Hong Kong government to give in. That is the message from Chief Executive Leung Chun-ying on Tuesday after three students started a hunger strike.

On Monday, 18-year-old Scholarism leader Joshua Wong and members Isabella Lo and Prince Wong declared that they would stop eating until the government resumes talks on democratic reform in Hong Kong with student protesters.

In response, Chief Executive Leung told reporters on Tuesday that he hopes the Scholarism student trio “take care” of themselves as temperatures in subtropical Hong Kong fall to 15 degrees Celsius (59 Fahrenheit). Leung added that “any form of resistance cannot achieve universal suffrage for Hong Kong.”

The hugely unpopular Beijing-backed leader had earlier issued a stern warning to student protesters after their unsuccessful attempt on Sunday night to escalate the protests by surrounding government offices in Admiralty to prevent Leung and civil servants from reporting to work. Hong Kong police violently drove protesters off a main road outside government headquarters with batons, pepper spray, and a water cannon, and civil servants were told to report to work in the afternoon.

“From now on, police will enforce the law without hesitation,” Leung said. “Some people have mistaken the police’s tolerance for weakness.”

Joshua Wong, a prominent face in the leaderless Umbrella Movement, is fully aware that the hunger strike is an act of desperation to revive a flagging movement.

“I know it is really harmful to my body, however it is the only way to give pressure to the government to get a meeting with us,” said Wong, who supposedly weighs only 93 pounds (42 kilograms), to CNN.

In a statement on his Facebook page, Wong added that the hunger strike is a “last resort” to prevent the Umbrella Movement from “stagnating.”

After more than sixty days of civil disobedience and one dialogue with the government, student protesters have not made any headway in achieving their demands for fully democratic elections in Hong Kong.  Student leaders from the Federation of Students (HKFS) were also prevented from flying to Beijing to speak with Chinese premier Li Keqiang.

Worse, there appears to be growing rift between “frontliners” and student group leaders. Scholarism and HFKS are increasingly being criticized at nightly rallies in Admiralty for lacking a clear plan of action for the movement and for giving orders from the main protest site podium instead of joining their fellows at the front of clashes with the police.

“Frontliners” are also not too supportive of the Scholarism hunger strike. Some have accused Wong of trying to get hospitalized and pull off a “glorious retreat,” while others note that a hunger strike won’t move a government that has been responding to student demands with police violence for more than two months.

Frontliner: Joshua Wong on hunger strike? Illogical. They just want to be hospitalized & call it a “glorious retreat” pic.twitter.com/aaYHgqYSjb

Given the current state of the Umbrella Movement, Leung can thus afford to be dismissive towards the students’ hunger strike.

The Scholarism trio, who are just drinking plain water, could wear themselves out before Leung concedes to their demands.

Twenty-nine hours into the hunger strike, Scholarism announced on Twitter that Prince Wong vomited twice in an hour, and was given gastric medication.