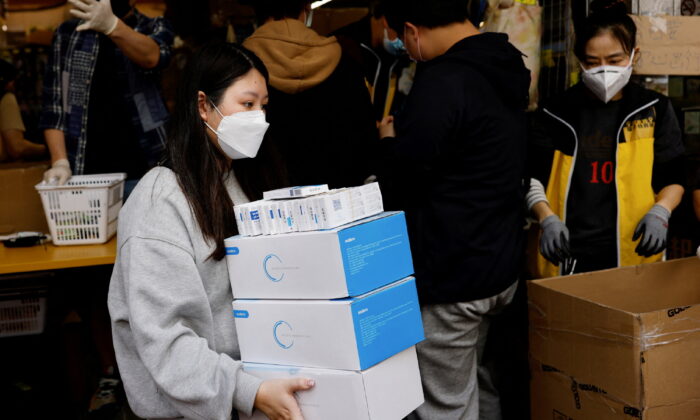 The mandatory rapid antigen tests (RAT), and their plastic accessories are expected to worsen marine and land pollution in the financial hub of 7.4 million people where some beaches and hiking trails are already awash with microplastics.

Each day, the school sector, which resumed face-to-face classes this month, will use 760,000 sets of RAT kits which include a plastic bag, tube, and bottle, said Edwin Lau, founder of environmental organization The Green Earth.

“This is just the estimation for one day. So one can imagine the horrifying volume of waste due to the daily rapid test,” he said, adding that the government should have advised residents to recycle paper items and the plastic bag, but instead encouraged them to throw everything in the garbage.

“If they had advised the public (to recycle), the city would have saved at least some resources and reduced some waste.”

RAT tests are already washing up on the pristine beaches of the Soko islands, located to the far southwest of the city.

Over the past year Hong Kong has generated a colossal amount of disposable plastic waste from quarantine hotels and isolation facilities, which is not recycled due to fear of contamination.

The city’s three landfills are almost at capacity.

The government said in an email response to Reuters that it was “reasonable to expect” a surge in disposable waste, such as masks, RATs, and disposable plastic tableware. It encouraged a green lifestyle as “far as possible” while having regard for public hygiene.

Official figures show a 33 percent rise in plastic disposables in 2020 with environmentalists expecting waste to have surged further since 2021 as authorities grapple to implement a “Dynamic zero” COVID strategy.

Compounding the crisis are towering piles of Styrofoam boxes on the streets since February. Used for daily deliveries of food from China, they are typically returned to the mainland for reuse, but truck drivers have been banned from taking them back across the border.

A dining ban, which prevented customers from eating in restaurants after 6 p.m. until April 20, has led to a surge in takeaway boxes being dumped.

Due to a mandatory mask rule, if every Hong Kong person wears a single use mask daily, “its 225 million masks potentially going to the landfill every month or ending up in our environment,” said Dana Winograd, co-founder and Director Plastic Free Seas.

“We have been doing this for two years.”