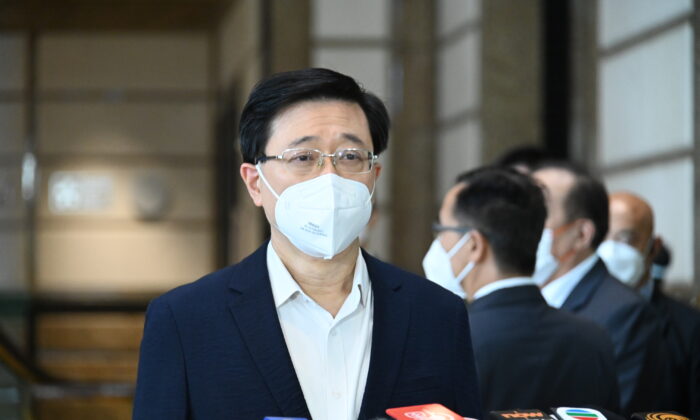 On April 29, after days of delay, Lee finally held a briefing on his platform at Hong Kong’s Convention and Exhibition Center. But while claiming to value freedom of the press, at least five media outlets, including The Epoch Times, The Reporter, Sound of Hope, NTD TV, and Getty Images, were refused admittance to the briefing.

On April 30, Lee attended a Q&A session organized by the media and was asked about any practical measures to convince people that freedom of the press is indeed protected.

Lee replied, “There is already freedom of the press in Hong Kong, but beware of people using the press as a cover for illegal or political purposes.”

His comment was widely seen as reflecting his attitude towards freedom of the press.

Lee has repeatedly said that the platform may not cover all areas due to limited space, and he will elaborate on those issues in his future policy address once he is elected.

Lo Kin Hei, chairman of the Democratic Party of Hong Kong, said Lee’s platform was mostly rehashed, and only the platform name is new. In Lo’s opinion, one of the first tasks of the government is to build mutual trust with the public, and to show a willingness to listen to the concerns of the public. Carrie Lam’s current  administration has a poor record of consulting the public about the implementation of policies and has made people feel increasingly alienated. There was no mention from Lee how he will resolve this problem.

Chu Tsz-lok, the Democratic Party’s civil affairs spokesperson, commented on Lee’s proposal of setting up a volunteer network of “district services and caring teams” in Hong Kong’s 18 districts. Chu said that District Council members are supposed to play a supportive role in their districts, but Lee has deliberately ignored the role of District Councils and set up a pro-establishment-led volunteer network, which has proceeded to bury some of the public voices and brought a very negative impact on social development.

Chung Kim-wah, deputy chief executive of the Hong Kong Public Opinion Research Institute, told The Epoch Times that Lee’s platform is “nothing new.” Even if some new words are used, they all repeat the key points mentioned by the past two administrations. For example, both Leung Chun-ying and Carrie Lam said that they would “enhance Hong Kong’s competitiveness, speed up the public housing policy, and solve the housing problem.”

What concerned Chung is Lee’s proposal of setting up “caring teams” in the 18 districts. Chung said they could become the equivalent of neighborhood committees set up by the CCP in mainland China, where social control is the primary goal.

On the whole, Lee’s platform offers nothing of importance at all. It’s just a formality, and Lee is simply going through the motions, Chung said.

Benson Wong Wai-Kwok, a former assistant professor of politics and international relations at Hong Kong Baptist University, told The Epoch Times that Lee has completely avoided the catastrophic crisis that Hong Kong is currently facing––the huge wave of emigrations from the island.

Wong also criticized Lee for just copying Carrie Lam’s policies of “integration into the Greater Bay Area” and “seizing the opportunities of the Belt and Road initiative.” Lee is completely ignoring the fact that residents of the Greater Bay Area are hostile toward Hong Kong for spreading the COVID-19 epidemic and that countries that are participating in the Belt and Road initiative are at a standstill due to China’s economic difficulties, Wong said.

In addition, Lee doesn’t dare touch on the political crisis, police violence, and the damage to the rule of law in Hong Kong after the implementation of the Hong Kong National Security Law, for fear of “making too many mistakes by saying too much,” Wong said.

Johnny Y. S. Lau, a current affairs commentator, said in an earlier radio interview that Lee’s platform focused solely on the economy and people’s livelihoods and seems to be based on Beijing’s “Hong Kong governance policy.” But for the time being, the CCP doesn’t want Hong Kong’s political issues touched, for fear of stirring up many contradictions and issues between China and the United States.

At a Q&A session on April 30, Lee said for the first time that political reform was not a priority for the sixth Hong Kong government because “there are many other projects that need to be done.”