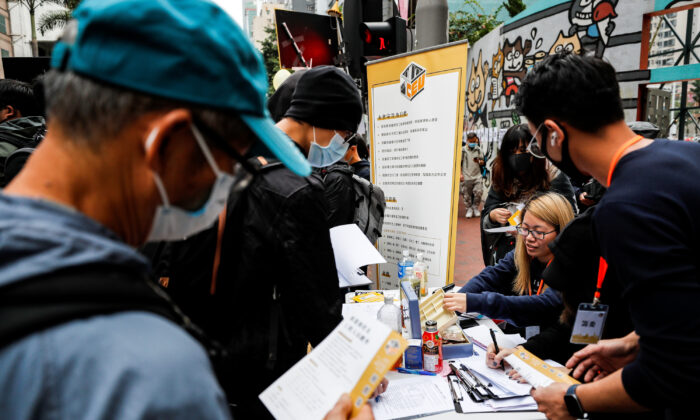 Protesters queue up at a booth of Hong Kong Construction and Engineering Employees General Union to apply for membership during pro-democracy protests on New Year's Day, to call for better governance and democratic reforms in Hong Kong, China, on Jan. 1, 2020. (Tyrone Siu/Reuters)
By Reuters

His aim is to ramp up pressure on Hong Kong’s government, which has so far made no political concessions to protesters’ demands for greater democracy in the Chinese-ruled city, despite millions of people marching in the street.

“The ongoing pro-democracy movement has fundamentally changed people’s lives,” Ngai told Reuters, the day before he set up a booth along the route of a Jan. 1 march, to sign up new members. “It has forced many who were ignorant about society to stand up.”

As violent clashes with police become more common, the pro-democracy movement has reached a point of “anger and hopelessness,” said Ngai, and needs new tactics.

Ngai said he and his team persuaded about 90 engineers, architects and construction workers to join his Hong Kong Construction and Engineering Employees General Union in the past month.

His booth was only one of dozens along the 4 km (2.5 mile) route of the New Year’s Day march, each with a distinct flag and logo, attracting queues of hundreds of people to join new unions for civil servants, hotel staff, theater professionals and others.

Ngai and his fellow organizers are spearheading the biggest push to unionize the laissez-faire, ultra-capitalist finance mecca—where collective bargaining rights are not even recognized—since Britain handed the city back to China in 1997.

They are also at the forefront of the ever-experimenting Hong Kong pro-democracy movement as it looks for more effective forms of protest.

“The movement has been thriving on its ad-hoc character,” said Ma Ngok, a political scientist at the Chinese University of Hong Kong. “Now more people think the movement may be a long haul, so they need a more organized base to sustain it.”

About 40 pro-democracy unions, including Ngai’s, have formed in recent months or are in the process of registering with the government, with dozens more starting to organize, according to the Hong Kong Confederation of Trade Unions (HKCTU).

The confederation, which last month started running crash courses on establishing unions, said about 2,000 people have already joined unions this year and thousands more joined in late 2019. The city has a population of about 7.4 million.

Labor Department records show that 25 new unions registered last year, compared to 13 in 2018. Of those, 18 formed in the second half of the year, as protests escalated.

Like many new protest tactics, the call to unionize first spread via the encrypted messaging app Telegram, where a channel promoting labor organization has grown to more than 74,000 subscribers in less than three months.

Traditional unions in Hong Kong are seen by citizens primarily as clubs for hobby classes, banquets and retail discounts. The new unions are motivated more by protecting workers from being punished by employers for expressing their views.

About two months after protests began in June over a now-withdrawn extradition bill that would have allowed extraditions of suspected criminals to China, protesters got a wake-up call on Beijing’s powers of coercion. The mainland’s aviation regulator demanded Hong Kong’s flag carrier Cathay Pacific suspend staff involved in or supporting demonstrations.

Many new unionists say the problem is widespread, especially where bosses are keen to avoid conflict with China for fear of damaging business.

A 26-year-old woman who identified herself as Cynthia told Reuters she heard of an auditing firm that hastily organized a lunch for all employees at the same time as a large protest which many of her fellow professionals wanted to attend during their break. She described that as “oppression” and said it was one of the reasons she is helping to establish the Accounting Bro’Sis Labor Union.

Some employees have been reprimanded for expressing political views on their personal Facebook accounts, said Gary Chan, secretary of the Hong Kong Financial Industry Employees General Union, which he said has recruited 160 members since late September.

Programer Alex Tang said his newly formed, 280-member Hong Kong Information Technology Workers’ Union was developing a database of employers who would not threaten or dismiss staff for supporting protests.

Many believe unions will provide safety in numbers.

“If we strike as individuals, we may be suppressed by companies,” said a 23-year-old assistant architect surnamed Lam, who was lining up at Ngai’s booth, wearing a black face mask, on Jan. 1.

The drive to unionize comes as Hong Kong is grappling with a recession as tourist numbers and retail sales decline amid the ongoing protests.

While the new unions cannot promise much in terms of immediate economic benefits, they may in time be able to organize more effective strikes and address the city’s deep inequalities, said Eli Friedman, an associate professor at Cornell University who studies labor in China.

“It’s too soon to tell if they will get the union density to exercise that kind of power,” said Friedman.

Many new union leaders say they recognize that gaining members and changing cultural attitudes to unions will take time. But they are committed to improving workers’ rights, with a long-term goal of organizing mass strikes to increase pressure on the government to allow everyone the right to vote for the city’s leader.

“We have to stay organized in the long run and consolidate the consciousness of the people of Hong Kong that has arisen over the past half-year,” Lee said. “All of the unions will decide together when it is time to strike.”