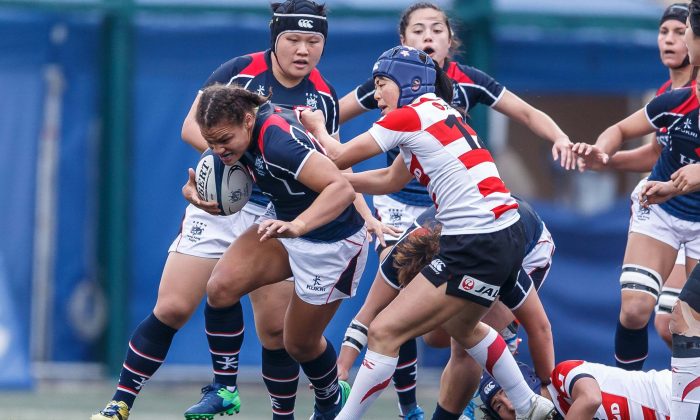 HONG KONG—In a previous article we wrote about the ‘seismic’ shift in rugby in Hong Kong, when Hong Kong women qualified for the Women’s Rugby World Cup, to be held in Ireland in August 2017. This is first time a Hong Kong team, men or women, has qualified outright for a World Rugby tournament, either fifteen-a-side, or seven-aside rugby.

The women deservedly came though the Asia-Oceania qualifying competition, hosted in Hong Kong, by beating Fiji although losing to Japan. The top two teams qualified; Japan and Hong Kong.

For a long time, women’s rugby in Hong Kong has been in the shadow of the men’s game. As it is in most countries, but times are changing, and the balance shifting, and Hong Kong women have made the most of their opportunity to develop their game..

Part of the strategic vision for the Hong Kong Rugby Union is for both the Men and Women to qualify for the Rugby World Cup: the women have done so for 2017 in Ireland; the Men hope to for 2019 (in Japan). And there’s the Sevens, and the desire to qualify for the World Cup, but more prestigiously, the 2020 games in Tokyo.

The facilities provided with the Elite Rugby Programme give the professional players a dedicated resource for strength and conditioning training, along with medical, nutritional and sports psychology advice to hone player’s skills as individuals and as a team. The appointment of two fulltime coaches to nurture the players has also been critical. Jo Hull, Women’s Rugby Performance Manager, and Sam Feausi, Women’s Rugby Development Manager were appointed in mid-2015, and have guided Hong Kong’s women rugby from humble origins to the World Cup in 2017.

The women players are supported; not only with excellent training and coaching resources but financial support through scholarships. Add to this the effort of the Union to organize tours (to Spain) and overseas matches (against Kazakhstan) as preparation for the World Cup qualifier, it is evident the progress made by Hong Kong is grounded in strategy. And if the Women acquit themselves proudly in Ireland in 2017 it will augur well for younger players to aspire to 2021.

Rugby Sevens, with the profile the Olympics provided has created an opportunity for Women’s rugby to greater status alongside Men’s. Local Rugby Unions often have to make a decision to prioritize Sevens or Fifteens, Men or Women, but Hong Kong is fortunate it can focus on all…it has the resources, funding and vision to match. Hong Kong women, in fifteens, did well in their own right, but the team has a core of Sevens players, most full-time rugby players, with experience competing in international rugby, under pressure, to provide a platform for the fifteen-a-side team to develop.

2016, has been a landmark year for Hong Kong rugby, culminating in the Women qualifying for the Women’s Rugby World Cup. The men will now concentrate on the qualification for the 2019 Rugby World Cup. And both the Men and Women will still focus on Sevens, to qualify for Elite Sports Funding for Rugby from the Hong Kong Government.

It is so rare for Hong Kong to qualify for an elite World Cup for a team sport, and Women’s rugby is to be congratulated on their achievement. All parties, players, coaches, administrators and Government Officials know the exposure created is either a wonderful opportunity to further the game and cement progress in the sport; or a poisoned chalice, if the results backfire.

Thus hardwork starts in January. With the experience and guidance from Hull and Feausi, Hong Kong Women are in excellent hands, to represent themselves, the sport and the HKSAR, in competing alongside the best in women’s rugby. The training and preparation will turn to reality in August when Hong Kong line-up alongside New Zealand, Wales and Canada for a deserved opportunity to play against the elite in their sport.