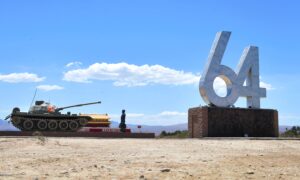 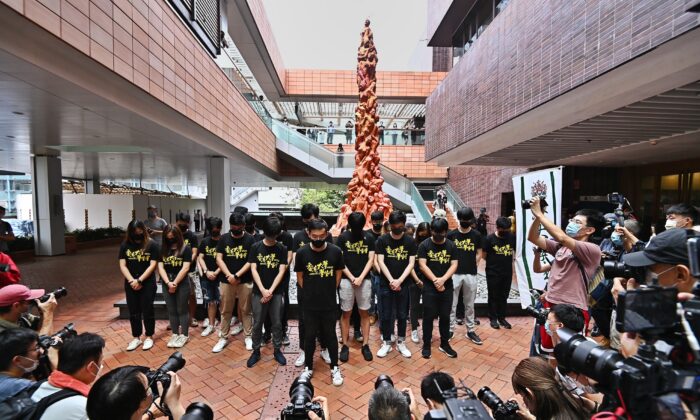 Members of the Hong Kong University Students' Union hold a moment of silence before the Pillar of Shame in Hong Kong on June 4, 2021. (Sung Pi-lung/The Epoch Times)
HK Current Affairs

A group of students from the University of Hong Kong (HKU) paid tribute to the victims of the bloody 1989 Tiananmen Square Massacre by cleaning the Pillar of Shame at the school’s campus on June 4.

Charles Kwok, president of the Hong Kong University Students’ Union, expressed hope that their actions can safeguard the truth while continuing the spirit of defending the freedom of expression and pursuit of justice. Thirty-two years ago on the same day, he explained that students in Beijing took to the streets to fight for democracy but they were violently suppressed by the Chinese Communist regime.

On June 4, 1989, the Chinese Communist Party (CCP) ordered its troops to open fire on student protesters and unarmed civilians on Tiananmen Square. The Chinese regime denies having initiated a violent crackdown, and any discussion about the protest movement is considered taboo in China.

Unnamed sources within the CCP said that at least 10,000 people were killed that day, according to declassified British cable and declassified U.S. documents.

The Pillar of Shame is an eight-meter-tall statue depicting a tower of mangled bodies. On the base of the statue are words, including “June 4th Massacre” and “The old cannot kill the young forever.”

Cleaning the statue has been an annual tradition for the student unions. On Friday, Kwok and other students also laid down flowers and held a moment of silence to remember the victims.

Kwok added that with Hong Kong’s freedoms rapidly declining, it became even more important to hold the annual event.

Early on Friday, Hong Kong police arrested Chow Hang-tung, a prominent pro-democracy activist, for allegedly promoting an unauthorized assembly. This year marks the second year in a row that the Hong Kong government banned residents from participating in an annual candlelight vigil at the city’s Victoria Park.

Last year, thousands of Hongkongers defied the ban and held the traditional vigil, which was organized by the Hong Kong Alliance in Support of Patriotic Democratic Movements in China. Chow is the vice chairwoman of the alliance.

An HKU senior student surnamed Ng said it was his first time participating in the event. He said he did not take part in the past because he didn’t believe it would bring any changes.

Ng said he was worried when he heard about Chow’s arrest and that holding the memorial event could pose some risks. However, he said he decided to come because he didn’t think he had done anything wrong.

“I will keep on doing what I think should be done. There is no need to worry too much,” he added.

Ng said he did not plan to go to Victoria Park on Friday evening since there could be considerable risks.