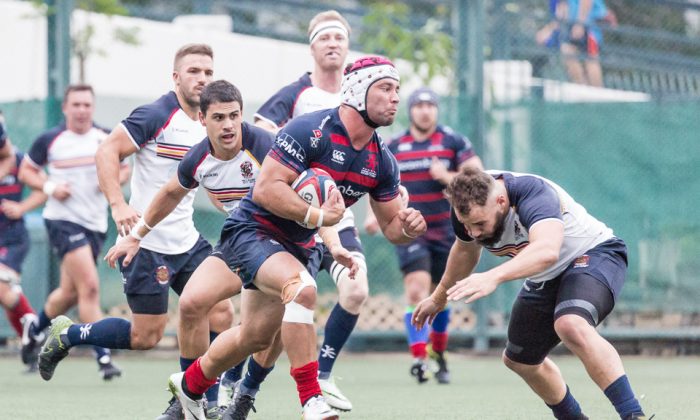 Scottish showed attacking intent from the outset of the game, and expertly used the full width of the pitch. Their sharp passing created space for winger Conor Hartley to barge over the line in the corner after only 4 minutes. Flyhalf Gregor McNeish added the conversion, and Scottish led 7-0, and never looked back.

McNeish was unerringly accurate all afternoon and only missed one conversion. Scottish were rampant. There were three major differences between the sides. Firstly, Scottish consistently crossed the gain line, and created forward momentum: HKCC struggled to do so, and either had to defend or recycle the ball making little progress.

Secondly, Scottish moved the ball with speed and discipline; HKCC lacked pace and fluidity in the backs.

After Hartley opened the scoring, number 8, Josh Dowsing made it 12-0, Flanker Kane Boucat added a third, and fullback Ben Tyler the fourth; after 25 minutes Scottish were comfortably ahead 26-0 and with the added try bonus point.

HKCC restored some pride with a try by flanker Lawrence Babe, converted by winger Jack Metters. Scottish soon regrouped, and after more adept passing, Ben Tyler went over for another try, duly converted. By half time Scottish had a comfortable lead 33-7.

The second half followed the same pattern as the first; Scottish added five more tries through hooker Shae Turner, prop Jack Parfitt, two from substitute Ashton Hyde, and a second for Hartley. After 70 minutes Scottish had amassed a dominant 68-7 lead.

In the final 10 minutes HKCC managed two quick tries, by winger Sebastian Brien and centre Gair Currie. Despite HKCC finishing well, it could not hide the disappointment of being on the receiving end of a heavy defeat, 68-17.

For Scottish this was a record score for them in the Premiership, but it was the manner of play that was so gratifying. Excellent defense, but incredibly effective attack. Had they run the ball more often the score would be been higher.

In other matches in the Premiership, Société Générale Valley lost at home to USRC Borrelli Walsh Tigers, 28-10. Tigers victory meant they now lead the Premiership. Natixis HKFC ground-out a narrow win 19-12 over Kowloon. In the league Tigers have 20 points, Valley 19, HKFC 18, Scottish 16, Kowloon 13, and HKCC is adrift at the bottom with 7 points.

The Premiership takes a takes a two week break, as HKRU host the international Cup of Nations tournament, with Hong Kong competing against Russia, Kenya and Chile.