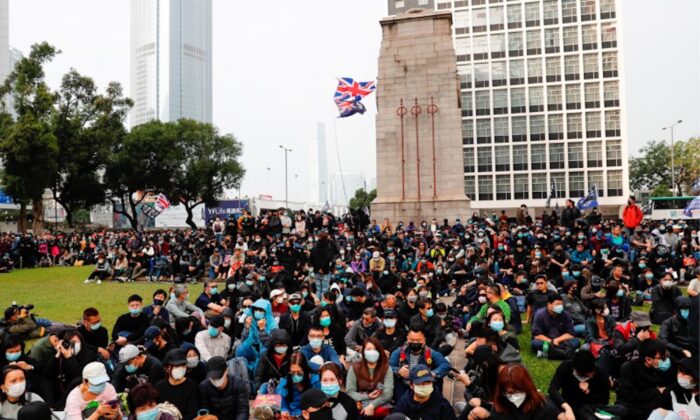 Protesters attend a rally to call for democratic reforms in Hong Kong on Jan. 19, 2020. (Tyrone Siu/Reuters)
By Reuters

HONG KONG—Several hundred Hong Kong protesters gathered on Jan. 21 at the site of an attack six months ago by an armed mob on pro-democracy demonstrators, denouncing the lack of progress by police in bringing those responsible to justice.

Chinese-ruled Hong Kong has been embroiled by more than seven months of turmoil sparked by a now withdrawn extradition bill that would have allowed individuals to be sent to China for trial.

The youth-led protests, including mass marches, petrol bomb attacks and battles on university campuses, have since morphed into a broader revolt against authorities and strong-arm Chinese rule.

Hong Kong returned from British to Chinese rule in 1997 with sweeping promises of a high degree of autonomy and freedoms. But the perceived failure of Beijing to honor these commitments has fueled the protests, posing a grave challenge to Chinese leader Xi Jinping.

China denies meddling in Hong Kong and blames the West for stirring up trouble.

Some protesters in a concourse below the Yuen Long train station in a district close to the border with China said they remained traumatized by scenes of an armed mob of white-shirted men beating up black-shirted protesters and ordinary people on July 21 last year.

A pro-democracy district councillor, Zachary Wong, criticized the police for not preventing the attack, and for not apprehending any of the attackers afterwards when they retreated into a nearby village and were surrounded by officers.

Yuen Long district councilor Tommy Cheung, who has helped set up a task force to probe the attack, said none of the 37 men arrested so far, some with organized criminal gang backgrounds, had yet seen their cases go to trial.

Jason Liu, a 29-year-old masked protester in the crowd, said he’d lost confidence in police enforcement: harsh on pro-democracy protesters but lenient toward pro-government allies, even those suspected of serious crimes.

“They always have excuses, and justify everything they do as right,” said Liu, who was dressed in a gray hoodie while listening as riot police surrounded the area. “It’s really unfair how twisted and biased law enforcement has become.”

More than 7,000 protesters have been arrested in connection with the protests so far, including nearly 1,000 who have been charged.

Moody’s downgraded Hong Kong’s credit rating one notch this week as the city’s leader flew to the World Economic Forum in Davos for a charm offensive amid the turmoil.

Despite the backlash against Beijing, there are few signs of Beijing heeding demands for democracy and respect for the freedoms guaranteed at the handover.