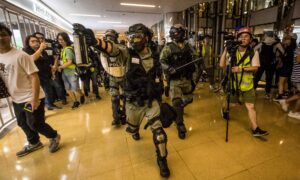 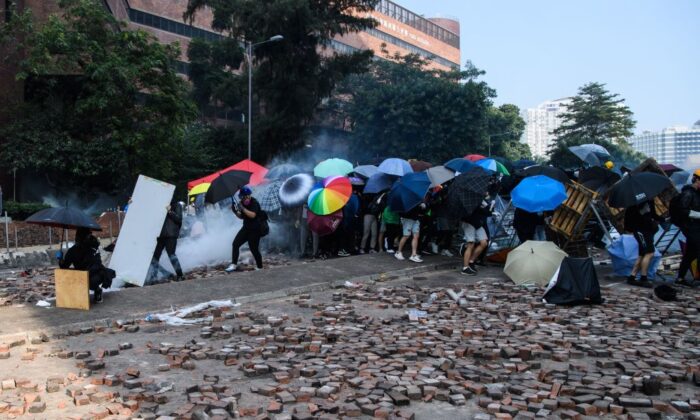 Protesters attempt to escape the campus of the Hong Kong Polytechnic University after it was surrounded by police in the Hung Hom district of Hong Kong on Nov. 18, 2019. (Anthony Wallace/AFP via Getty Images)
HK Current Affairs

Hong Kong police have announced that it will stop enforcing a controversial anti-mask law, after a local court declared the regulation unconstitutional.

The police made the announcement at their daily press conference on Nov. 18, several hours after the Hong Kong High Court declared the law “incompatible with the Basic Law”—the city’s constitution—and unconstitutional because its restrictions on fundamental rights went further than was reasonably necessary.

There are only three cases of people being arrested solely for breaching the mask ban, according to the police, with only one charged. The police said it would discuss with the Department of Justice how to deal with those cases.

The court ruling also said that the law “exceeds what is reasonably necessary to achieve the aim of law enforcement, investigation, and prosecution of violent protesters even in the prevailing turbulent circumstances in Hong Kong.”

Moreover, the anti-mask law “fails to strike a reasonable balance between the societal benefits promoted and the inroads made into the protected rights.”

Hong Kong leader Carrie Lam implemented the anti-mask law on Oct. 5, after invoking a colonial-era emergency ordinance, bypassing the oversight of the Legislative Council (LegCo). Within days, a group of 24 pan-democracy LegCo members and former legislator Leung Kwok-hung took to the court to challenge its constitutionality.

The High Court also ruled that the colonial-era Emergency Regulations Ordinance was “incompatible with the Basic Law” when invoked “on any occasion of public danger.”

But as for the constitutionality of invoking the ordinance under the “occasion of emergency,” the High Court stated that it would leave that question open.

The emergency ordinance grants the chief executive broad powers to make any regulations, bypassing the LegCo to make arrests, stop communications, and issue punishment during “occasions of emergency or public danger.”

In a LegCo committee meeting after the court ruling, Sonny Au, the undersecretary for security, said that the city government would need time to look into the court ruling and seek legal opinion, according to local media.

But Vernon Loh, acting senior assistant solicitor general for the Department of Justice, said in a statement that the government would no longer enforce the anti-mask law.

Following the court’s ruling, Civic Party lawmaker Dennis Kwok urged the Department of Justice to drop all anti-mask charges against people, and urged the Hong Kong not to appeal the court ruling, according to Hong Kong media RTHK.

Joshua Wong, activist and the iconic leader from the 2014 Umbrella Movement, called the court ruling a “rare legal victory” for protesters in a tweet.

The court ruling, however, has been overshadowed by intense clashes between the police and protesters at Polytechnic University (PolyU), which began this weekend, when police fired tear gas, water cannons, and deployed a sonic device against protesters who hurled petrol bombs and fired arrows.

On Nov. 18, police continued to surround the university campus, firing rubber bullets and tear gas, blocking protesters trapped inside the school from leaving.

Reporters with the Hong Kong bureau of The Epoch Times were also trapped inside PolyU, before they left safely at around 1:30 p.m. local time on Nov. 18.

Hundreds of protesters, including those clad in black and office workers, took to the business district of Central at noon on Monday, shouting slogans of “save PolyU” in a sign of solidarity with protesters at the school.

“They are blocked by police. They cannot leave even though they are not attacking police. I want Hong Kong people to stand with them,” said a protester surnamed Li, who took part in the protest at Central, in an interview with RTHK.

Speaking on Nov. 18, Patrick Nip, Hong Kong’s secretary for constitutional and mainland affairs, warned that protests this past weekend “have reduced the chance” for the Hong Kong government to hold its district council elections, which are planned for Nov. 24, according to Hong Kong media.

This article has been updated to clarify the nature of the police arrests of people for violating the mask ban.