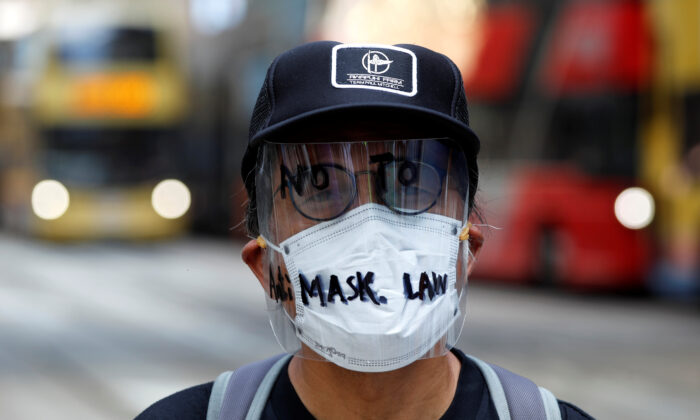 An anti-government protester wearing a mask attends a lunch time protest, after local media reported on an expected ban on face masks under emergency law, at Central, in Hong Kong on Oct. 4, 2019. (Tyrone Siu/Reuters)
Asia & Pacific

A controversial anti-mask law in Hong Kong put in place by Hong Kong leader Carrie Lam in early October has been declared unconstitutional by the city’s high court.

Judges ruled that the government’s blanket ban, which targeted pro-democracy protesters, was “incompatible with the Basic Law” of the Chinese-ruled port city.

A group of 25 pan-democrat lawmakers had challenged the legal ordinances, which went into effect on Oct. 5 after Lam invoked a colonial-era emergency law in the wake of intense protests following the shooting of two teens by Hong Kong police.

On Nov. 18, justices Anderson Chow Ka-ming and Godfrey Lam Wan-ho ruled that the mask ban was unconstitutional because it had bypassed Hong Kong’s Legislative Council.

Protesters in Hong Kong, who originally opposed a now-withdrawn extradition bill, have since mid-summer called upon the government to accede to five major demands, including the right to general suffrage.

The “Prohibition On Face Covering Regulation” was passed via special legislation on the basis of the “Emergency Ordinance,” a law from the era of British colonial rule. The Hong Kong government, under Lam’s leadership, had justified the ban as necessary to counter “public danger” caused by the protests.

Throughout the over five months of unrest, protesting Hongkongers have made black clothing and face masks an unofficial symbol of the movement. The masks are worn by participants who fear reprisals by their employers, the government, and family and acquaintances who may ostracize them for their involvement with the protests.

The High Court had held a two-day hearing on Oct. 31 to review the mask ban. According to the South China Morning Post, “the highly anticipated legal challenge was presided over by justices Anderson Chow Ka-ming and Godfrey Lam Wan-ho, the same judge who previously refused these applicants’ demand for immediate interim relief that would have suspended the ban.”

The Post cited pan-democrat Dennis Kwok Wing-hang as saying that the case was a matter of upholding Hong Kong’s rule of law against the totalitarianism of the Chinese Communist Party (CCP).

For over a week, clashes between protesters and Hong Kong police have been particularly intense. In the night of Nov. 17 and into Nov. 18, the police launched an operation to disperse several hundred protesters holed up in Hong Kong’s Polytechnic University.

Officers in the surrounding area were seen wielding AR-15 rifles, and at least three warning shots were fired. People trying to leave the scene were arrested indiscriminately, including wounded protesters, nurses, and other medical staff. Some of those arrested were severely beaten, including by police officers hiding in an ambulance.

Protesters at the university had spent several days preparing fortifications. When the police began their clearance action, the protesters set fire to bridges and other routes leading to the campus to impede movement. An arrow fired by a protester hit a media liaison officer in the leg.

On Nov. 11, a traffic policeman drew his service revolver and shot a protester at close range. The 21-year-old was sent to hospital in critical condition, and the incident caused further outrage among Hongkongers.

Throughout the five months of unrest, most of the demonstrations in Hong Kong have been characterized by peace and orderliness, including three rallies in June and August that each gathered over one million people.

Tensions in the city have been exacerbated by excessive force on the part of the Hong Kong police, the government’s lack of willingness to respond to the protesters’ demands, and widespread fear among Hongkongers about the Chinese Communist Party’s tightening grip on Hong Kong and erosions of the Western-style liberties enjoyed by its more than 7 million residents.