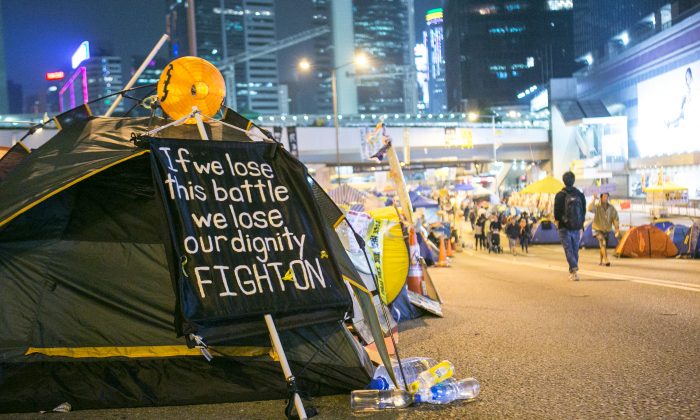 A tent with a sign on it is inside the main area of the Admiralty protest area on Nov. 17, 2014. (Benjamin Chasteen/Epoch Times)
China

Hong Kong’s high court has authorized police to help carry out injunctions against the protest site in Admiralty.

On Monday, Nov. 17, the Court of First Instance briefed the plaintiffs, bailiffs, and police before giving the latter two the go-ahead to execute the court order to clear the blockage of the access into CITEC Tower, Admiralty, according to a press release.

Police can arrest those who prevent the bailiffs from carrying out their duties, and have urged those occupying the area to comply with the court order, dismantle their barricades, pack up their personal belongings, and end their act of civil disobedience.

Hong Kong publication Ming Pao reports that CITEC Tower staff will first ask the protesters to leave and try to shift the barricades themselves early Tuesday morning. If they are unsuccessful by 9:30 a.m. HKT (10:30 p.m. EST), the bailiffs and police will take over.

The student-led protesters have been occupying the area since Sept. 28, and have erected barricades and set up their tents on the roads leading to the government buildings, blocking traffic. An unofficial Facebook census puts the tent count at 2,269 as of Nov. 15.

Joshua Wong plays on phone outside citic tower, on road that is to be cleared tomorrow morning #OccupyHK pic.twitter.com/gX7tT8qlnj

When asked about the police statement, protester Kawai Yu said: “I think it depends on how they do it. In Mong Kok they hit people with batons.

“If the police carry out their actions peacefully, it may be better for the movement.

“But I think there’s a high probability that the police will use violence, because they’re not saying what they’re doing.”

The 35-year-old IT worker stays several nights a week at the protest site and sleeps over in his cousin’s tent.

Yu is worried for the safety of his sister and friends in Admiralty, and says he will take a half-day and head to the protest site in the afternoon because he suspects that’s when “there will be some action” as the protesters most likely won’t cooperate with the bailiffs.

Although the police could technically move in after midnight, all is calm at Tim Mei Avenue, one of the roads leading to the government offices, and Umbrella Movement supporters are not overly concerned of pre-dawn police action.

It really doesn’t look like protesters at #OccupyHK admiralty going to put up a fight. Roads empty of people, tents. pic.twitter.com/5dpYiOOCWz

Like Yu, IT worker Thomas and retail staff Ethan don’t intend to stay the night, but will try to get back on Tuesday after work to check on things. The 27-year-olds have both seen the tear gas and have journeyed to the Admiralty site for more than 30 days, and they will be leaving their tent on the streets.

Not everyone is willing to risk arrest for occupying public streets.

When asked if he would stay if he didn’t have to work, Thomas said: “I don’t think I would stay here at this spot, but I will remain in the main area of Admiralty.

“I don’t want to have a criminal record.

“If anyone decides to stay, they should do it wisely.”

This will be the first tent to be ripped away by police tomorrow morning. None claim it. #OccupyHK citic tower pic.twitter.com/tlRxSOJXds

There is another court injunction taken against the protesters in Mong Kok by two taxi associations and a public mini-bus company, but the high court has yet to give a green light to the bailiffs and the police to take action.

A Hong Kong legal academic and a judge, speaking in his own capacity, have found the Mong Kok court order questionable.

Still, the Hong Kong public might not mind if the protesters are cleared out.

A poll by the Chinese University of Hong Kong from Nov. 5 to Nov. 11 showed that about 67.4 percent of people feel that protesters should end their occupation immediately, while those who are against the movement have rose to 43.5 percent from 35.5 percent in October.