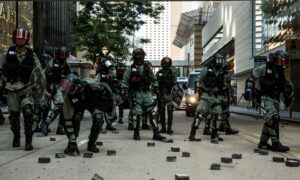 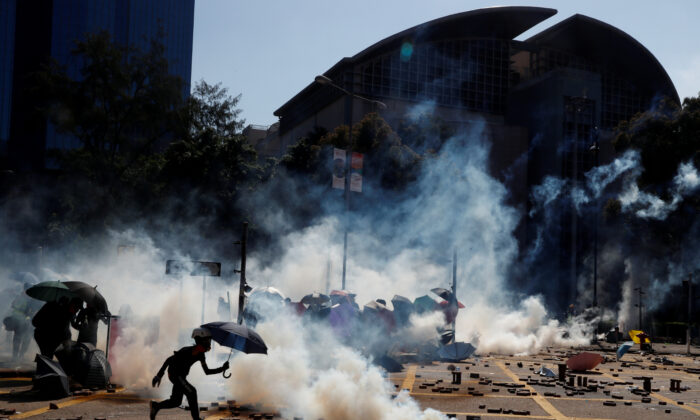 A university in Hong Kong saw some of the worst violence since pro-democracy protests began, as protesters faced off with police, shooting arrows and hurling petrol bombs as the latter fired volleys of tear gas and deployed water cannons.

The Long Range Acoustic Device, intended to send warnings over long distances, was fixed atop an armored truck that arrived at the university at around 2:42 p.m. It emitted a loud, shrill sound that lasted for about three seconds.

In a press release, the police said that the device was only a broadcasting system and not a weapon, saying that it would not “generate ultra-low frequency which will cause dizziness, nausea or loss of sense of direction,” as some local media had reported. They also warned the public not to “assist rioters in any way,” or risk committing the offense of “Taking Part in a Riot,” which is punishable by up to 10 years in jail.

Earlier in the week, protesters started to occupy the university, using it as a base to block the city’s central cross-harbor road tunnel, in an effort to pressure the Hong Kong government into fulfilling their demands.

Mass protests began in June in direct response to an unpopular extradition bill that would have allowed the Chinese regime to seek transfer of criminal suspects. Many saw it as an erosion of the city’s autonomy, as promised when the territory reverted from British to Chinese rule in 1997.

The bill has since been withdrawn, but protests have continued, evolving into wider resistance against what demonstrators see as growing control of Hong Kong by communist China, along with calls for full democracy for the territory.

From around 2 p.m., police began firing tear gas and water cannons continuously for about three hours.

Arrows from protesters had hit a police’s media liaison officer in the late afternoon.

By around 9:30 p.m., police had besieged the campus and blocked off exits, warning in an announcement that all protesters must leave by 10 p.m. via a specified exit at the north of the campus, called Block Y.

Epoch Times reporters witnessed police intercepting reporters who wished to leave, saying they needed to verify their identity and ensure that they didn’t participate in protest activities.

Around midnight, police superintendent Louis Lau Siu-pong warned in a video published on the police force’s official Facebook page that if protesters continue to commit “dangerous acts, we are left with no choice but to use the minimal force required, including the use of live rounds to fight back.”

Around the same time, the Hong Kong Journalist Association released a statement, stating that all journalists leaving the university will be arrested “unless they can provide valid press verification documents”—citing a phone call with the police.

The association also said reporters were injured while covering the clashes, including one who suffered a skull fracture and brain hemorrhage after being hit with water from the water cannons.

Photos circulated online from the scene, showing a dozen medics tied up on the ground, reportedly arrested by police. Two social workers were also arrested while trying to leave the site, according to a statement by the Hong Kong Social Workers’ General Union.

At around 2 a.m. Monday morning, police stopped pro-democracy lawmakers who arrived at the scene from taking away protesters who were willing to leave campus. The lawmakers said they continued to negotiate with the police but to no avail.

Three live shots were fired at around 3:00 a.m, at the junction of Ferry Street and Jordan Road. Police explained that the officers’ lives were “under serious threats” after protesters attacked them in order to rescue a female protester. They said that an “initial inquiry” showed that no one was hit.

Firing of tear gas and water cannons continued through 5 a.m. Riot police stormed into the campus after breaking through the main entrance, making a number of arrests.

Earlier on Sunday, protesters also held an authorized peaceful rally in Chater Garden, a park in the Central business district, singing the protest anthem “Glory to Hong Kong” and some prayer songs before forming a human chain. Towards the evening, around 1,000 gathered at Edinburgh Place, where they used paper boards to create a symbolic Berlin Wall, and posted slogans and pictures supporting the movement.

At PolyU, a student who called himself T told The Epoch Times in the evening that he showed up to campus in order to fight for Hong Kong’s future.

“We do not have any choice, we did everything peacefully to express our demands, but our government never listened,” he said, adding that he hoped the government could reflect on what they have done to Hongkongers.

On Saturday, China’s People’s Liberation Army soldiers from the local barracks appeared for the first time on Hong Kong streets to clear away road blockades, triggering fears that a military intervention by the Chinese regime could be imminent.

Another protester, who didn’t provide his name, said that protesters resorted to throwing bricks because they had no other options.

“You can’t just stand here to let them murder you, you have to fight back for justice,” he said.

Around 21,411 students, alumni, and staff from PolyU have signed a joint statement appealing to the police to stop the use of force around the campus and allow all who were inside to leave safely.

U.S. Rep. Jim McGovern (D-Mass.) on Nov. 17 called on the Chinese and Hong Kong authorities to “immediately deescalate the situation and exercise restraint” at the university.

“More violence [and] bloodshed will only make things worse,” he said in a tweet.

“I do not condone the violence on the part of some of the students, but equally it is important to understand that the disproportionate police brutality and cynical, manipulative, provocation by agents provocateurs is what has brought Hong Kong to this crisis point,” Alton said in a press release.

The Hong Kong bureau of The Epoch Times contributed to the report.