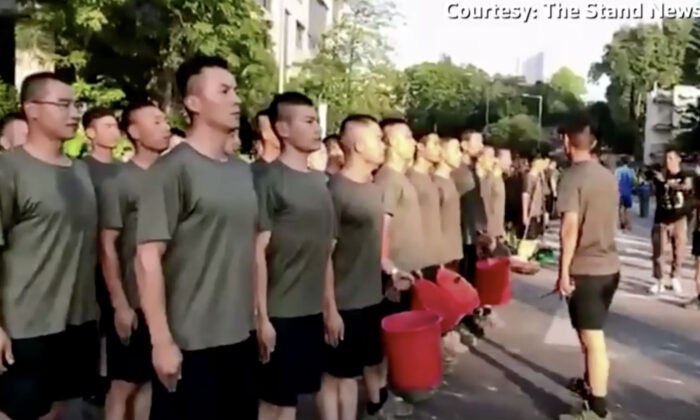 The troops’ participation in the clean-up operation marked the first time Chinese soldiers have appeared on the ground during more than five months of demonstrations against the Chinese communist regime’s growing influence on the city.

[BREAKING] People's Liberation Army was deployed to clear roadblocks outside HKBU. It's the first time PLA directly involves in HK political event. We must stay cautious that it may be China's salami tactics that China starts using PLA to intervene in HK affairs more directly. pic.twitter.com/Lt1bktRy7A

Chinese state media outlets have portrayed the ongoing protests as “riots,” and have repeatedly threatened that the PLA could be sent in to crush the movement.

Late afternoon, locals were cleaning up bricks and barricades on a road near Hong Kong Baptist University in Kowloon Tong, when around 50 PLA soldiers from the nearby barrack arrived with buckets and brooms to clear the remaining debris, according to Hong Kong Free Press.

A cameraperson, who accompanied the soldiers, filmed the exercise, the outlet reported.

Chinese troops have appeared on Hong Kong streets only once since the 1997 handover to help clear up after a typhoon in 2018.

In a statement, they cited Article 14 of the Garrison Law, which states that the PLA “shall not interfere in the local affairs” of Hong Kong, and the Hong Kong government may ask the garrison to assist in “the maintenance of public order or disaster relief.”

A city spokesman said the Hong Kong government did not request assistance from the PLA, but the military initiated the operation as a “voluntary community activity.”

The PLA garrison in Hong Kong said that when some residents began cleaning, some troops “helped clear the road in front of the garrison gate.”

Demosistō, a pro-democracy organization, said the clean-up operation could set a “grave precedent” for the government to invite the PLA to deal with internal problems.

The pro-democracy lawmakers added that Hong Kong authorities and the garrison have “cooperated to create excuses,” and ignored the laws restricting the PLA’s activities in Hong Kong.

In August, Beijing moved thousands of troops across the border into Hong Kong in what state news agency Xinhua described as a routine rotation. Foreign envoys and security analysts estimate up to 12,000 troops are now based across Hong Kong—more than double the usual garrison number.

Saturday’s clean-up came after some of the worst violence since the movement began in June, with police besieging the Chinese University of Hong Kong on Tuesday.

Protesters and students had since barricaded at least five university campuses, but appear to have left the campuses by late Saturday.