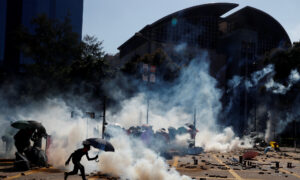 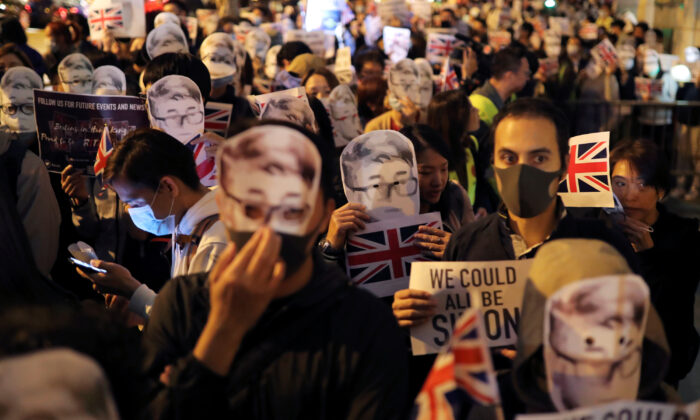 HONG KONG—Hong Kong police on Nov. 29 withdrew from the wreckage of a university campus damaged in weeks of clashes, as pro-democracy activists canvassed social media for support for more rallies at the weekend.

Senior faculty members of Hong Kong Polytechnic University toured the campus after police left, visiting the canteen and sports hall and inspecting smashed windows and charred piles of what used to be barricades.

After more than five months of increasingly violent demonstrations, the Chinese-ruled city has enjoying relative calm since local elections on Sunday delivered an overwhelming victory to pro-democracy candidates.

Activists are trying to keep up momentum for the movement, after winning backing from U.S. President Donald Trump that has renewed global attention on the Asian financial hub and sparked blistering warnings from Beijing.

“Many classrooms, laboratories and library were destroyed. Even so, there’s been no loss of life. We insisted on adopting a humane way to solve the crisis,” university president Teng Jin-Guang told reporters.

He said more than 1,000 protesters had left the campus over the last two weeks. Despite the huge damage, he said he was confident that the next semester would start on time.

Located on Kowloon peninsula, the campus turned into a battleground in mid-November, when protesters barricaded themselves in and clashed with riot police in a hail of petrol bombs, water cannon and tear gas. About 1,100 people were arrested last week, some while trying to escape.

At one point on Friday, a man and woman emerged from the campus wearing black face masks and walking hand-in-hand. They walked straight out and down the street, with no sign of police. Local media were not sure if they were protesters.

Demonstrators are angry at what they see as Chinese meddling in the freedoms promised when Britain returned Hong Kong to Chinese rule in 1997.

Beijing warned Washington of “firm counter measures” after Trump signed into law congressional legislation which supported the protesters on Wednesday.

On a visit to Bangkok, Hong Kong Chief Executive Carrie Lam on Friday tried to reassure the Thai government and businesses that Hong Kong was still an attractive financial hub.

‘We Could all be Simon’

Pro-democracy protests have rocked the former British colony since June, at times forcing businesses, government, schools and even the international airport to close.

Protesters plan to gather at the British consulate at 7 p.m. (1100 GMT) on Friday to urge the British government to protect nationals based in the Chinese territory.

That comes after a former British consulate employee, Simon Cheng, said Chinese secret police beat him, deprived him of sleep and shackled him in an attempt to force him to give information about activists leading the protests.

Posters advertising Friday’s event had slogans including “We could all be Simon.” Cheng is a Hong Kong citizen who worked for the British government for almost two years.

“Freedom is in peril. Defend it with all your might. Fight for freedom. Stand with Hong Kong,” read another.

Other demonstrations planned over the weekend include a rally by secondary school students, a march to protest against police spraying tear gas near children and a “march of gratitude” where protesters are planning to march to the U.S. consulate.

A rally planned for Dec. 8 by Civil Human Rights Front, the group that organized million-strong marches in June, is expected to provide the best gauge of how support for the pro-democracy movement is holding up.

By Jessie Pang and Martin Pollard