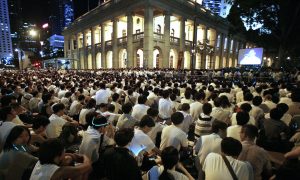 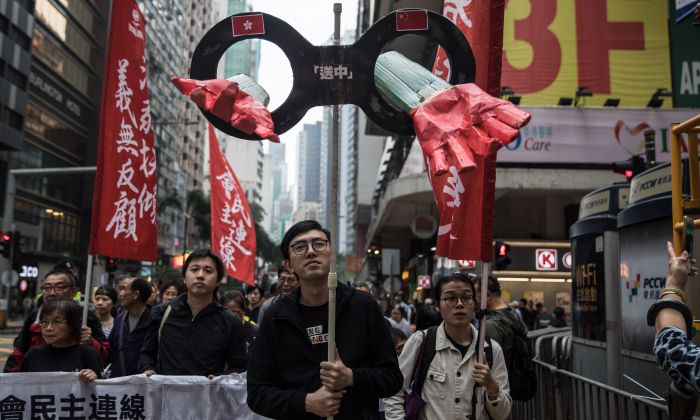 Protesters march along a street during a rally to protest against the government's plans to approve extraditions with mainland China in Hong Kong on March 31, 2019. (DALE DE LA REY/AFP/Getty Images)
Chinese Regime

In response to the Hong Kong government’s plans to amend its extradition laws to allow suspects to be sent to mainland China, local groups have organized a mass parade on April 28 to oppose the amendments.

Organized by the Civil Human Rights Front, a Hong Kong pro-democracy group, the parade is the second citywide protest within a month.

Hong Kong residents, business groups, and international rights groups have expressed concerns that, given the Chinese regime’s disregard for rule of law, the changes could allow Beijing to charge and extradite its critics with impunity.

An extradition request also must be approved by the Legislative Council, Hong Kong’s unicameral legislature.

The amendments would allow criminal suspects from any region—including mainland China—to seek extradition without the Legislative Council signing off on the requests. The city’s head of government, the chief executive, would be able to approve the extradition requests directly.

The Legislative Council will vote on the amendments, which city authorities hope to finalize by the second half of the year.

The government has said the proposed changes are aimed to plug a loophole exposed by a Taiwan murder case.

Taiwan police found Poon’s body in Taipei City in March 2018 and have pursued Chan as the main suspect in Poon’s murder. But Chan remains in Hong Kong, as there is no extradition agreement between Hong Kong and Taiwan.

In Hong Kong court, Chan pleaded guilty to four counts of money laundering by withdrawing cash from Poon’s account on April 12 and is awaiting his sentencing.

But a source who is close to Hong Kong Liaison Office, the representative office of Beijing in Hong Kong, told the Chinese-language Epoch Times in a recent interview that the Taiwan case is not the true reason for the Hong Kong government’s proposal.

“It is a political task that the [Beijing] central government has commanded Carrie Lam, the chief executive, to do,” said the insider, who wished to remain anonymous.

The insider outlined four reasons why the Chinese regime wants the extradition laws changed: as a measure to response changes in U.S. policy toward China; to target and charge groups that the Chinese regime deems “hostile forces”; force mainland Chinese activists who have sought refuge in Hong Kong and strongly oppose the Chinese Communist Party to leave the city; and threaten Hong Kong pro-democracy activists into taking a more “moderate” route.

Pro-democracy groups have sought universal suffrage for local elections and called for formal independence from mainland China, a sore point for Beijing.

Chu Hoi Dick, a Legislative Council member, also shared in a Facebook post that he believed the amendments were a political ploy by the Chinese regime, including having “Taiwan become a part of the People’s Republic of China [the Chinese regime].” Beijing considers the Taiwan island to be part of its territory despite it being a de-facto country with its own democratically-elected government, currency, and military.

On March 31, roughly 12,000 Hong Kongers paraded in the streets to oppose the extradition amendments. At a rally, participants called it “the most vicious law in [Hong Kong’s] history.”

Joseph Zen, a cardinal of the Catholic Church, led the protest chants during the parade: “Extraditing fugitives to mainland China will turn Hong Kong into a black jail.”

Claudia Mo, a Hong Kong politician, said during a rally after the parade that the amendments would “make everybody feel risky,” expressing concerns that suspects could be arrested secretly and sent to China without due process.