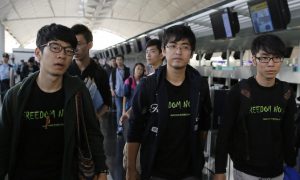 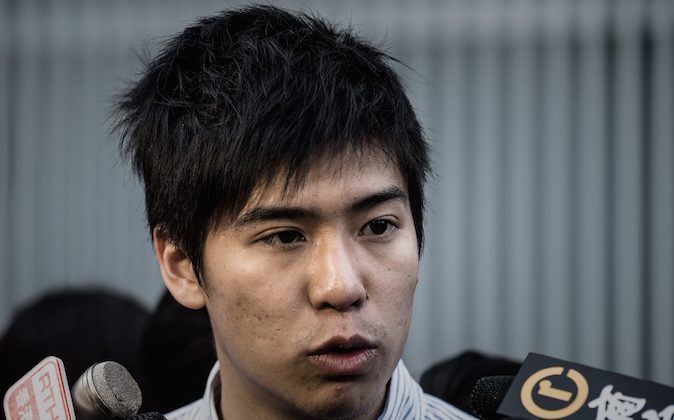 Lester Shum, one of the leaders of the Federation of Students, talks to the media outside the government building in Hong Kong on Jan. 6, 2015. (Philippe Lopez/AFP/Getty Images)
China

The Hong Kong government’s official report on the 79-day long Occupy protests has been poorly received by pro-democracy supporters.

On Tuesday, the government submitted a 217-page long “Report on the Recent Community and Political Situation in Hong Kong” to the Hong Kong and Macao Affairs Office, Beijing’s local department for handling the two former colonies. The government said the report “objectively and truthfully” presents the Occupy protest events and includes opinions from “different sectors of the community.”

The report, which is the sole concession student protest leaders wrung from government officials during a televised dialogue in October, is supposed to convey the concerns of pro-democracy supporters to China. Protesters felt that an earlier report did not accurately reflect people’s sentiments about democratic reform in the semiautonomous Chinese city.

The latest document is comprised mainly of summaries and a chronology of events from the National People’s Congress Standing Committee’s (NPCSC) Aug. 31 decision—Hong Kong can choose their top leader in 2017 by universal suffrage but Beijing will have the final say, a ruling that sparked the protests—to Dec. 15, when police evicted protesters from Causeway Bay, the last occupied site.

Details of police brutality towards protesters and the Umbrella Movement’s mass support—tens of thousands of Hongkongers attended mass rallies in the early days of the protests—were not included in the report.

In concluding, the report says is is “the common aspiration” of the Hong Kong and Chinese governments as well as Hong Kong residents to implement universal suffrage for the 2017 Chief Executive elections “in accordance with the Basic Law” and the NPCSC’s ruling on the electoral process.

The pro-democracy camp has slammed the report, with the most common complaint being the government’s misrepresentation of the public’s views.

Political group Hong Kong 2020, which is led by former Hong Kong Chief Secretary Anson Chan, said in a statement that the report “fails totally to convey the deep sense of disappointment and betrayal felt by Hong Kong people” at the NPCSC’s decision, which offers “a sham version of democracy” that makes a “mockery” of Hong Kong’s Basic Law.

The Basic Law states that universal suffrage is the “ultimate aim” for Chief Executive elections. In 2007, the NPCSC ruled that Hong Kong “may” elect the city’s leader by universal suffrage in 2017, but the Aug. 31 interpretation effectively overturned the earlier ruling.

Pan-democrat lawmaker Lee Cheuk-yan said the report was incomplete because it left out incumbent Chief Executive Leung Chun-ying’s claim that the Umbrella Movement was supported by external forces, according to Radio Television Hong Kong. In October, Leung told the press that “foreign forces” were behind the pro-democracy protesters, a claim that the Chinese regime echos.

Lee added that Beijing should instead read a report submitted by pan-democrats a few days earlier, which reflects “the real sentiment of the people of Hong Kong.”

Joshua Wong, the prominent 18-year-old leader of student group Scholarism, said in a Facebook post that the report was “meant to be a sweetener from the government” after their dialogue with the Hong Kong Federation of Students (HKFS).

“But there’s no sugar coating on this sweetner,” said Wong. “It’s poison.”

Lester Shum, the deputy secretary-general HKFS and one of the participants in the student-government talks, likened the report to a news clippings and magazine collection compiled by a school student, and said that it did not tackle Hong Kong’s political stalemate head on, Wall Street Journal reports.

Shum added that the public will only be angrier with the government report in light of recent police plans to arrest and prosecute key protest members, of which he is one.

Police started calling up prominent Occupy movement protesters on Monday, instructing them to report to police headquarters in Wan Chai to “assist in investigations” by next week or await home arrest.

Hong Kong leader Leung Chun-ying stressed throughout the Occupy protests that acts of civil disobedience will not sway the Hong Kong government and the Chinese regime into speeding up democratic reform in the city, and promised that “resolute” action will be taken against the “illegal” protesters.

Leung repeated in a press conference on Tuesday that “coercive actions that are illegal or disrupt social order” will not change matters.

But protesters are not about to bow down in the face of government backlash.

“Under pressure from those in power, we must still plow ahead in the coming year to change our future,” said Joshua Wong in a Facebook post.”

“We have no room to compromise.”