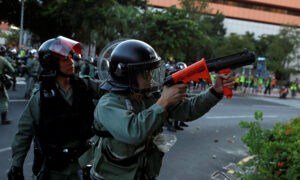 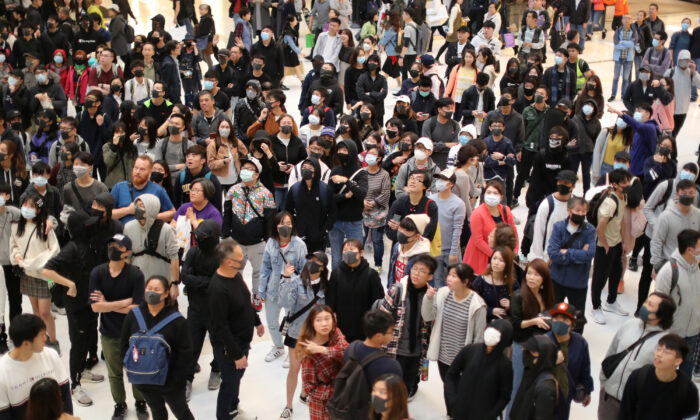 HONG KONG—Hundreds of protesters marched through festive Hong Kong shopping malls on Dec. 26 for a third day over the Christmas holidays, with riot police deployed in the event of unrest.

The “shopping protests” focused on malls across the Chinese-ruled city since Christmas Eve have turned violent at times, with police firing tear gas to disperse demonstrators in bustling commercial areas filled with shoppers and tourists.

The turnout on Dec. 26 was smaller than on the previous two days, but dozens of riot police patrolled near shopping centers on the Kowloon peninsula and in the rural New Territories. Some officers entered the malls to observe chanting black-clad protesters.

Protests began in Hong Kong more than six months ago in response to a now-withdrawn bill that would have allowed extraditions to mainland China, where courts are controlled by the Communist Party.

They have since evolved into a broader pro-democracy movement. Earlier this month, after pro-democracy candidates overwhelmingly won district council elections, they had been largely peaceful.

Some restaurants and stores pulled down their shutters in the malls as protesters, some wearing balaclavas and carrying black flags, marched by. At some dining outlets, protesters placed stickers and posters that read, “Free Hong Kong, revolution now.”

Demonstrators are angry at what they perceive as increased meddling by Beijing in the freedoms promised to the former British colony when it returned to Chinese rule in 1997. They have recently taken out their frustrations in vandalizing a Starbucks cafe and an HSBC bank branch.

HSBC has been linked to a police crackdown this month on a fund-raising platform that supports protesters. While the bank has denied any connection between the crackdown and its closure of an account linked to the group, it remains the target of protester rage.

Starbucks became a target of demonstrators after the daughter of the founder of Maxim’s Caterers, which owns a local franchise, publicly condemned the protesters.

By Joyce Zhou and Twinnie Siu