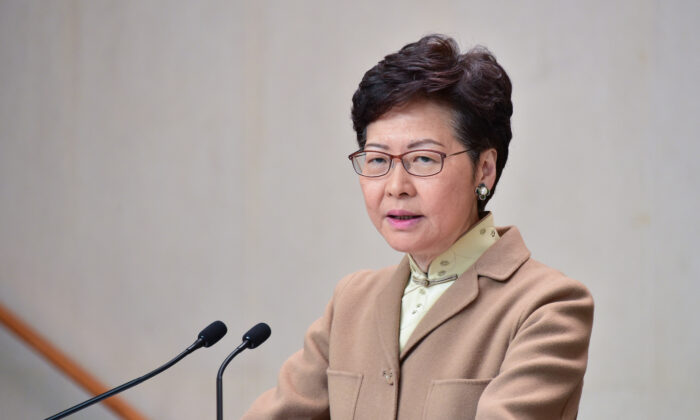 In her first weekly press conference of the new year, Hong Kong leader Carrie Lam was terse when it came to her future relationship with the newly appointed head of Beijing’s representative agency in the city.

“I could offer no particular comment on the personnel change in the central people government’s agency in Hong Kong. I have issued a press statement to welcome the appointment of Director Luo,” Lam said on Jan. 7.

Lam issued her statement on Jan. 4 welcoming Luo and thanking Wang. She pointed out that she had “good exchanges” with Luo on “co-operation between Shanxi and Hong Kong” when the two met in 2018.

According to China’s state-run media, Luo visited Hong Kong in December 2018 to draw business investment to Shanxi. He also visited the Hong Kong Stock Exchange to hold talks about helping Chinese companies in the province list on the exchange.

On Jan. 6, Luo met with the press at the Liaison Office to give a three-minute speech, but he did not take any questions.

Lam added that she and Luo will meet later this week. She added: “I am sure that we could work together in strict accordance with the implementation of ‘one country, two systems,’ and the basic law to ensure the continued stability of Hong Kong, especially after the seven months of social unrest that has caused society very major concern.”

In Hong Kong, what started out as protests against a controversial extradition bill has since evolved into calls for greater democracy, as well as demands for the city government to establish an independent inquiry over instances of police violence against protesters.

On Jan. 1 this year, over one million people marched in downtown Hong Kong to renew their demands, in an event organized by the local pro-democracy group Civil Human Rights Front (CHRF).

During the press conference, Lam criticized some “rioters” who spray-painted judges’ names on the walls of the city’s High Court in Admiralty on Jan. 1. She did not address the demands voiced by those taking part in the march.

According to Hong Kong media, words like “the rule of law is dead” were spray-painted on the walls of the High Court.

Hong Kong Police have arrested over 6,000 people since June. Most recently on Jan. 5., after 10,000 took part in a peaceful march in Sheung Shui, a town that borders mainland China, the march organizer said that 42 people were arrested.

Also during the press conference, Lam said the city government has adopted heightened measures, including enhanced monitoring at immigration checkpoints, to prevent the spread of an unidentified form of pneumonia that has engulfed Wuhan, a city in central China’s Hubei Province.

The first case was discovered in Wuhan on Dec. 12, and the local health commission has since confirmed 59 cases of the unknown virus.

In Hong Kong, the city’s hospital authority stated that there were 21 cases of patients with symptoms of respiratory infection or pneumonia as of yesterday. Some of the patients had been in Wuhan sometime during the past 14 days.