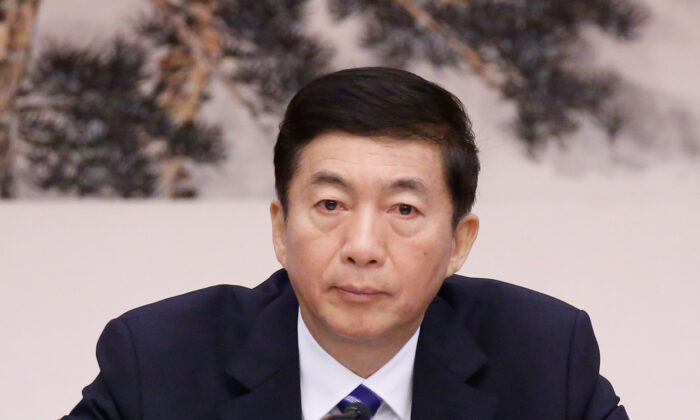 Communist Party Secretary of Shanxi province Luo Huining attends a session of his province on the second day of the 19th National Congress of the Communist Party of China at the Great Hall of the People in Beijing, October 19, 2017. (Reuters/Thomas Peter)
By Reuters

SINGAPORE—The Chinese regime has replaced the head of its Hong Kong Liaison Office, the most senior mainland political official based in the Chinese-controlled territory, following more than six months of sometimes-violent anti-government protests in the city.

Luo Huining, 65, was appointed to lead the office. the Ministry of Human Resources and Social Security said on its website on Jan. 4; until November, Luo was the top official of China’s ruling Communist Party in Shanxi Province.

He replaces Wang Zhimin, who had held the post since 2017. The government’s statement gave no other details on the change.

Reuters reported exclusively in November that Beijing was considering potential replacements for Wang, in a sign of dissatisfaction with the Liaison Office’s handling of the Hong Kong crisis, the worst since the city reverted to Chinese rule from British governance in 1997.

Luo, a loyalist of Chinese leader Xi Jinping, hasn’t previously held any Hong Kong-related position and is at the age when top Chinese officials typically retire. In Shanxi, he’d been tasked with cleaning up a graft-ridden, coal-rich region where corruption was once likened to cancer.

The Liaison Office, which reports to China’s State Council, serves as the platform for Beijing to project its influence in the city, and has come in for criticism in Hong Kong and mainland China for misjudging the situation in the city.

Wang is the shortest serving Liaison office director since 1997.

Ma Ngok, a political scientist at the Chinese University of Hong Kong, said it had been only a matter of time before Beijing made Hong Kong-related personnel changes, and that the switch did not necessarily indicate a change in policy.

“Given his age it is possible he is only a stop-gap appointment,” Ma said of Luo.

Johnny Lau, a political scientist and commentator, said Wang’s exit was unlikely to placate Hong Kong protesters who have demanded that the city’s leader, Carrie Lam, step down.

Writing in the Communist Party’s official People’s Daily in 2017, Luo said Shanxi Province had been ardently following instructions from Xi to clean up the mess there.

“All the province’s people have deeply felt that the all-out efforts to enforce party discipline have been like spring rain washing away the smog,” Luo wrote.

Before moving to Shanxi, Luo had been the top party official in the western province of Qinghai.

“Shanxi has gone from being a victim of a regression in its political environment to being a beneficiary of all-out efforts to enforce party discipline,” he wrote in 2017.

Mass protests erupted in June in Hong Kong over an extradition bill that would have allowed individuals to be sent for trial to the mainland, where justice is controlled by the Communist Party.

Though the bill was withdrawn, protests have continued over a broad perception that Beijing is meddling improperly in city affairs and complaints of police brutality.

Lam said in a statement on Saturday that the Liaison Office would continue under Luo’s leadership to work with the Hong Kong government for the “positive development” of the relationship between the mainland and Hong Kong.

She added that Luo’s predecessor had provided “staunch support” to the Hong Kong government’s efforts to curb violence and uphold the rule of law during the unrest of recent months.

According to his official resume, Luo was born and raised in eastern China’s Zhejiang Province.

In 1970, 16-year-old Luo was relocated to neighboring Anhui province to work as a farmer under a policy launched by the then-Chinese Communist Party (CCP) leader Mao Zedong, known as “Up to the Mountains and Down to the Countryside Movement.” The plan was initiated as part of Mao’s campaign to rid youth of “pro-bourgeois” thinking and learn from “proletariat” farmers

During this period, Luo was believed to be a loyalist of Anhui governor Hui Liangyu. Hui later became Party secretary of the province in 1994, holding that position until 1999.

In 2016, Luo was named Party secretary of Shanxi province after seven Shanxi provincial level officials were dismissed over corruption. During his tenure, he reorganized the provincial government, and restored the government’s operation.

In November 2019, Luo retired from this position and was named director of the standing committee of Shanxi province’s rubber-stamp legislature—a largely ceremonial position.