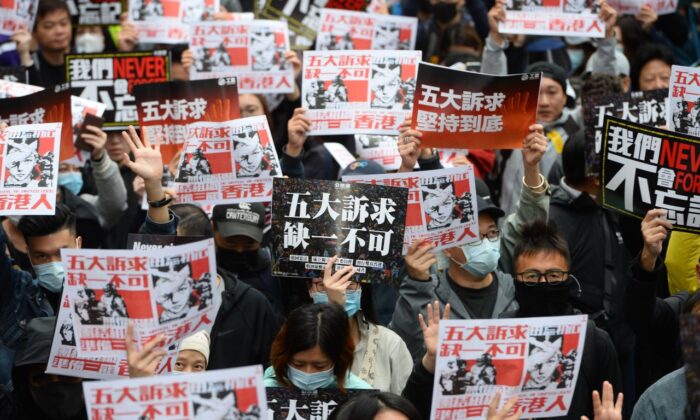 Protesters hold up placards with the words “Five Demands, Not One Less” in a march in Hong Kong on Jan. 1, 2020. (Sung Pi-lung/The Epoch Times)
By Frank Fang

Protesters marched in downtown Hong Kong on the first day of 2020, demanding that the Hong Kong government answer their demands.

The march was abruptly called off by police at around 6 p.m. local time despite the fact that CHRF had obtained police approval to hold the march from 3 p.m. to 10 p.m. on Wednesday.

Despite the sudden cancellation, the turnout was high; CHRF estimated that more than 1.03 million took part, according to a statement published on its Facebook page. CHRF also criticized the police’s far lower estimate of 60,000 as lacking credibility.

Prior to the march, a rally was held at Victoria Park where multiple activists spoke, including pro-democracy activist Ventus Lau and student activist Sunny Cheung.

Cheng called for more protests in the new year and shouted a popular protest slogan, “Heaven Will Destroy the CCP [the Chinese Communist Party],” saying that the CCP is the enemy of Hongkongers.

He also called on sanctions for all pro-Beijing companies that “turn their backs” on Hong Kong and befriend the Chinese regime.

Jimmy Sham, CHRF’s convener, while speaking to the press ahead of the march, stated that the purpose of the march was to reiterate the protesters’ longstanding five demands, which include universal suffrage and an independent inquiry into instances of police violence against protesters.

Sham also criticized the city government for suppressing Spark Alliance, a local nonprofit that raises money for legal and medical aid for arrested protesters. On Dec. 19, the police froze Spark Alliance’s bank account, which contained roughly HK$70 million (about $9 million), alleging that three men and one woman from the group were suspected of “money laundering.”

Local teachers have also been punished for supporting the protests.

On Dec. 20, Hong Kong’s Education Secretary Kevin Yeung called on schools to suspend teachers who have been arrested for offenses relating to the protests, according to local media RTHK. He added that 80 teachers had been arrested since June.

Sham called on protesters to join newly created pro-democracy unions in their line of work—which have set up booths along the march route—so that future strikes could be better organized.

At Victoria Park, more than a dozen protesters were seen holding U.S. flags, while many others donned oversized animal masks in the guise of popular cartoons, Pepes and Linden Pigs.

“We protest at the beginning of this year, to remind us and international friends that, let’s not forget and get used to police violence and state repression, and demonstrate our solidarity,” CHRF stated in a declaration published on its Facebook page.

At around 2:40 p.m. local time, protesters began marching from Victoria Park to the final destination of Chater Road in Central. Leading the march were several local pro-democracy politicians, including Andrew Chiu and Ho Kai-ming.

Protesters could be heard shouting slogans such as “Five Demands Not One Less,” “Not Afraid of Being Oppressed, We Walk Shoulder to Shoulder,” and “Oppose Police, Join Unions.”

They also held placards with different messages, including “Keep Our Commitment, Stand As One,” “Heaven Will Destroy the CCP,” “Never Give Up, Show Justice to the World,” and “2020 Liberate Hong Kong.”

At around 4 p.m. local time, the first group of protesters arrived at the final destination. There still remained a large number of protesters who had yet to step out of Victoria Park.

About an hour later, a clash broke out between a small group of protesters and the police at Hennessy Road in Wan Chai, located about midway between Chater Road and Victoria Park.

What exactly led to the clash remains unclear; police soon fired tear gas and pepper spray and made several arrests. RTHK reported that the police fired pepper spray directly at one of its video journalists at the scene.

At 5:40 p.m. local time, local police issued a press release, saying that it had arrested 5 “rioters” for vandalizing a bank at the junction of Hennessy Road and Luard Road.

CHRF has since issued a statement on its Facebook, saying that the police have contacted the group and demanded that the organizer call off the assembly by 6:15 p.m. local time.

Several netizens have left messages on CHRF’s Facebook post, saying that the police had intentionally created chaos for the purpose of ending the peaceful assembly.

On the messaging app Telegram, which has been widely used by Hong Kong protesters for communications and organizing events, users suspected that the people who vandalized the bank were not protesters, but police officers themselves.

The police denied the accusation with a second press release.

It pointed out that police escalated tensions at Luard Road after firing tear gas into the crowd. It also criticized the police for “searching and provoking citizens” upon deploying riot police at metro stations near the parade route.

“On the first day of year 2020, the Police dismissed the first licensed assembly of the year with absurd excuse. Hong Kong government have shown its unwillingness to listen to the voices of the mass, infringing the right of assembly of Hong Kong citizens,” CHRF stated.

At 8 p.m. local time, Hong Kong media Apple Daily reported that police arrested over 100 people who had not yet left the parade route near the Sogo shopping mall.