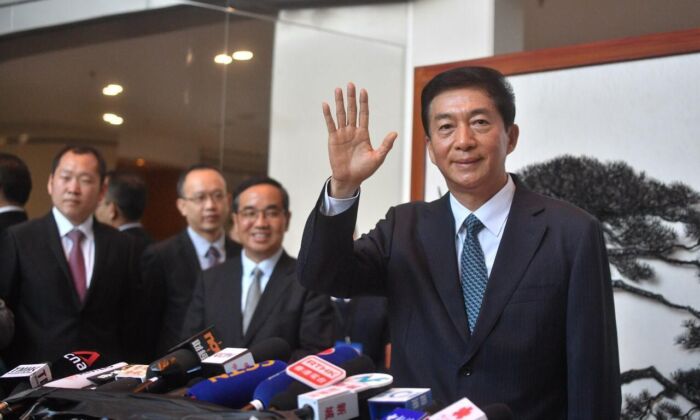 Luo Huining waves his hand to media at a press conference at the lobby of Chinese central government’s Liaison Office in Hong Kong on Jan. 6, 2020. (Huang Xinzhen/The Epoch Times)
By Nicole Hao

The new head of Hong Kong’s Liaison Office, Beijing’s representative agency in the territory, met with local media for the first time on Jan. 6.

Commentators believe his speech suggested that Beijing authorities wish to relieve the current tense relationship with Hongkongers, but that, ultimately, they’re not going to change policies toward the city.

Luo Huining, 65, was the first personnel change among Chinese officials in charge of Hong Kong since the city saw mass protests due to public anger over Beijing’s encroachment into city affairs. Many are dissatisfied that the Chinese regime reneged on its promise to preserve Hong Kong’s autonomy and freedoms after Hong Kong was transferred from British to Chinese sovereignty in 1997.

In the early morning hours of Jan. 6, a group of journalists had already lined up in front of the Liaison Office, located in Sai Wan, Hong Kong.

Shortly before 10:30 a.m. local time, Luo arrived and invited all media to enter the lobby, saying: “Today is quite windy. I … invite our journalist friends to enter the building.”

In a three-minute speech, Luo struck an affable tone, complimenting Hong Kong reporters for working hard, and noting that Hong Kong has contributed to the development of the Chinese economy.

Luo then quoted a sentence from Chinese leader Xi Jinping’s New Year speech, when talking about Hong Kong: “Without a harmonious and stable environment, how can people work and live joyfully?”

After delivering his speech, Luo left the lobby without answering reporters’ questions.

At the start of the press conference, Luo held up his right hand to greet the journalists. Hong Kong netizens noted that this is the same hand sign Hongkongers use during protests to represent their five demands. They suspected Luo wasn’t thinking about this meaning of the gesture.

In the past six months of pro-democracy protests, Xi has reprimanded protesters for engaging in “violent crime.” During a visit to Nepal on Oct. 13, 2019, Xi alluded to the Hong Kong crisis in a televised statement, saying that any attempt to “split China in any part of the country will end in crushed bodies and shattered bones.”

But in his televised New Year speech, Xi toned down his rhetoric: “I sincerely hope for the best for Hong Kong and our compatriots in Hong Kong.”

“Xi using a soft tone to Hongkongers means that he wants to have Hongkongers unified [with the mainland],” Tang said.

The Chinese Communist Party (CCP) has two main factions: one loyal to Xi and the other loyal to former Party leader Jiang Zemin.

Luo previously worked under Hui Liangyu in Anhui Province and Zhao Leji in Qinghai Province. Both Hui and Zhao were previously aligned with Jiang’s faction but announced their allegiance to Xi after he rose to power in November 2012. Zhao is also a member of the CCP’s top decision-making body, the Politburo Standing Committee.

Luo replaced Wang Zhimin, who together with Zhang Xiaoming, director of the Hong Kong and Macau Affairs Office within the cabinet-like State Council in Beijing, were Jiang faction members. Insiders previously told The Epoch Times that the Liaison Office had proposed the extradition bill that sparked the current unrest.

Though Luo and Zhang are both minister-level officials, because Luo has more work experience, Tang analyzed that Luo is likely to heed Xi’s direct orders instead of Zhang’s.

“Xi appointed Luo to lead the office, and is asking Luo to deal with the Hong Kong issue by only consulting his [Xi’s] opinions,” Tang said.

Bruce Lui, senior lecturer in journalism at Hong Kong Baptist University, told The Epoch Times that Luo is likely to follow Xi’s wish to use moderate means to deal Hong Kong protests, but that ultimately, the Party would not change its desire to meddle in the city’s affairs.

Hong Kong pro-democracy lawmaker Lam Cheuk-ting told the Chinese-language Epoch Times on Jan. 6 that Hongkongers should not have any expectations for Luo.

“The CCP has always been about absolute discipline. There are no moderates,” Lam said. Lam doesn’t believe Beijing’s regime will allow Hong Kong to enjoy true freedom.

Commentator Johnny Lau also told The Epoch Times that Beijing would not change its “high-pressure policy” in Hong Kong, but that international pressure and the U.S.–China trade deal had forced the Party “to make some strategic adjustments [to be less hardlined] on its Hong Kong policy.”

In October, a Party insider had told the Chinese-language Epoch Times that Xi would replace top Beijing officials in charge of managing Hong Kong affairs, including Wang and Zhang, after failing to report the real situation in Hong Kong to the leadership.

Recently, the same insider said that Xi planned to replace Zhang in the near future.