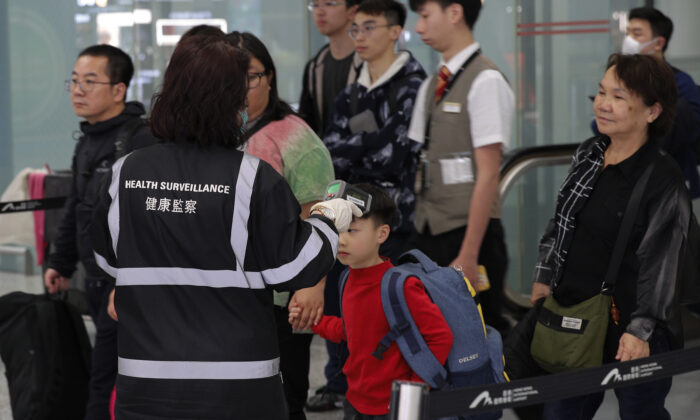 A health surveillance officer uses a device to check temperature of passengers near the immigration counters at the Hong Kong International airport, on Jan. 4, 2020. (AP Photo/Andy Wong)
By Eva Fu

An unidentified form of pneumonia that recently broke out in the central Chinese city of Wuhan has put neighboring regions on high alert, as authorities in China scramble to identify the source of the mysterious virus.

On Jan. 6, Hong Kong’s public hospitals admitted six more patients who presented symptoms of respiratory infection or pneumonia, bringing the total to 21, according to the city’s Hospital Authority. The patients have been to Wuhan in the past 14 days.

The local government in Wuhan, a major industrial and commercial city in Central China, has confirmed 59 cases of the unknown virus with seven in serious condition. All 59 are receiving medical treatment in quarantine.

An investigation has linked the illness to a local wholesale seafood market. Officials said they are still conducting medical observation on 163 people who had close contact with the patients.

The first case was discovered in Wuhan on Dec. 12, the health commission said. The authority first confirmed the outbreak on Dec. 31.

News of the virus has stirred panic across the country, prompting comparisons with the large-scale SARS outbreak that emerged in late 2002. Due to the regime’s heavy censorship, the disease spread to 37 countries and infected more than 8,000 people worldwide, causing close to 800 deaths.

In Hong Kong, local authorities said they have initiated a “serious response level”—the second level of three-tier response system—since Jan. 4 in response to the “cluster of cases of viral pneumonia,” and would isolate any suspected case for treatment.

Fears of another potentially deadly outbreak have propelled residents in the city to stock up on face masks.

Out of the 21 who have presented symptoms after returning from Wuhan, seven have been discharged while the others remain in stable condition. The youngest patient is 2-years-old.

The Hong Kong government is also stepping up measures to monitor the inbound flights from Wuhan and has installed infrared machines to detect signs of fever at checkpoints of the Hong Kong International Airport and high-speed railways, a spokesperson for the city’s Food and Health Bureau said on Jan. 4.

In a Jan. 6 conference on the issue, Hong Kong officials said it has alerted all medical professionals in the city to pay special attention to patients exhibiting symptoms of the suspected illness.

The World Health Organization (WHO) on Jan. 5 said it is “in close contact with national authorities in China” and monitoring the situation, but said that travel or trade restrictions are not necessary at the current stage.

The Center for Disease Control and Prevention told The Epoch Times that it is “coordinating closely” with WHO. The agency also posted a level 1 travel notice on Jan. 6 advising travelers to Wuhan to exercise usual precautions, including staying away from “living or dead animals, animal markets, and contact with sick people.” It also suggested that travelers wash hands often with soap and water.

The U.S. State Department has not updated its travel advisory, and did not respond to an inquiry from The Epoch Times about this issue.

Eight people in Taiwan have shown light fever symptoms after returning from Wuhan. Taiwan’s Center for Disease Control has implemented screening at airports for direct flights from Wuhan.

Macau authorities have also raised alert levels for infectious diseases and advised casinos to set up temperature-scanning devices at entrances. The city has seen five suspected cases, with four found to be false alarms after they were diagnosed with flu or regular cold. An investigation is underway on a 44-year-old woman, who became feverish following a visit to Wuhan in late December.

A suspected virus infection reported in Singapore on Jan. 4 turned out to be a false alarm.