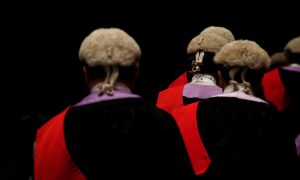 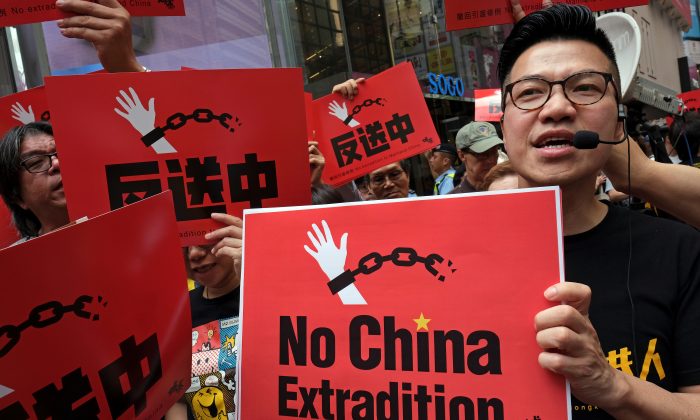 Demonstrators march during a protest to demand authorities to scrap a proposed extradition bill with China, in Hong Kong, China on April 28, 2019. (Tyrone Siu/Reuters)
Hong Kong

HONG KONG—More than 3,000 Hong Kong lawyers held a rare protest march on June 6 against a proposed extradition bill that could see individuals sent to China to face trial in what the last British governor said would be a “terrible blow” to the rule of law.

The lawyers, dressed in black, chatted animatedly among themselves as they made their way from the Chinese-ruled city’s highest Court of Final Appeal to the Central Government Offices on a sweltering evening.

The proposal and official refusals to back down have sparked growing outrage in the business, diplomatic and legal communities, which fear corrosion of the legal autonomy of Hong Kong and the difficulty of guaranteeing a fair trial in China.

“I want to do what I can to ensure the Hong Kong government is forced to backtrack … I am stunned they have come up with this plan,” said one mainland Chinese lawyer based in Hong Kong.

“Even if we are not directly exposed, we know better than most just how appalling the criminal justice system is across the border—there is no open, fair justice, you can’t always even get a lawyer. There is torture.”

The former British colony of Hong Kong returned to Chinese rule in 1997 with a guarantee of its freedoms, including an independent judiciary, under a “one country, two systems” formula.

“It’s a proposal, or a set of proposals, which strike a terrible blow … against the rule of law, against Hong Kong’s stability and security, against Hong Kong’s position as a great international trading hub,” the last British governor, Chris Patten, said of the proposed legislation.

Hong Kong leader Carrie Lam has been at pains to reassure people that there are adequate safeguards to any extradition request, but several senior judges have expressed concern.

“In a sense, this is polarizing everything,” said Neville Sarony, a senior barrister in the crowd. “And the inability or unwillingness of this government to listen … they are so stupid, so arrogant.”

This was the fifth, and largest, protest march held by Hong Kong lawyers since 1997 after a series of perceived intrusions by China on the rule of law. Dennis Kwok, a barrister who organized the march, said 3,000-4,000 lawyers had taken part, around a quarter of the city’s legal fraternity.

“How can we be expected to trust the mainland system?” said one senior corporate lawyer who was not authorized to talk to the media. “In Hong Kong, we have been made all too aware that a culture of arbitrary detentions and forced confessions remains just across the border.”

The proposed changes provide for case-by-case extraditions to countries, including mainland China, beyond the 20 states with which Hong Kong already has treaties.

Hong Kong’s Law Society this week called on the government to take more time to carry out extensive consultations on the bill rather than try to ram it through.

“(The bill) could easily and abusively be turned into a permanent mechanism to extradite Hong Kong people,” the society said. “In that case, the proposals, which are ill-conceived and hastily considered, would become entrenched. That will have profound and irreversible effects on the cherished status and the reputation of Hong Kong.”

Jennifer Van Dale, a commercial lawyer with 28 years experience in the city, said the bill could have profound business implications.

“I see a lot of clients that are choosing England or New York or Singapore, and so in a way, I think it undermines Hong Kong’s competitiveness. It’s a business issue.”

At the end of the march, the lawyers stood before the Hong Kong government’s headquarters, held their heads high and stared at the building for three minutes in silence, before walking off into the night.