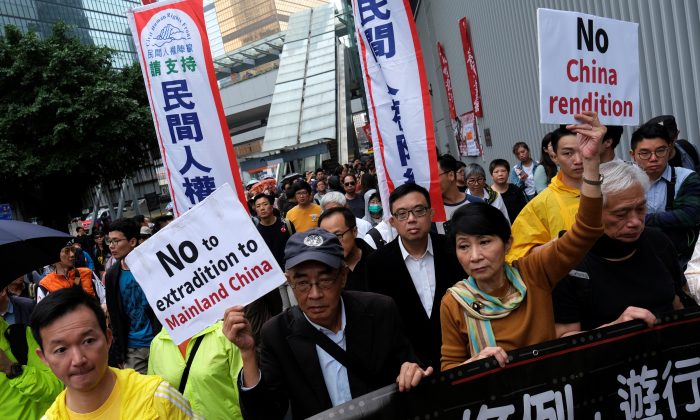 Demonstrators march during a protest to demand authorities to scrap a proposed extradition bill with China in Hong Kong, China on March 31, 2019. (Tyrone Siu/Reuters)
Hong Kong

HONG KONG—Hong Kong’s leaders launched laws on April 3 to change extradition rules to allow people to be sent to mainland China for trial, standing fast against growing opposition to a move many fear could further erode the city’s legal protections.

Thousands took to Hong Kong streets to protest against the laws over the weekend, joining an unusually broad chorus of concern from international business elites to rights’ groups and even some pro-establishment figures.

However, Hong Kong’s Chief Executive Carrie Lam said her government would make no further amendments before introducing the laws to the city’s parliament.

Small groups of protesters supporting the government’s bill briefly faced off against opponents outside the Legislative Council but later dispersed without incident. Opponents of the changes fear further erosion of freedoms and legal protections in the free-wheeling financial hub—rights that were guaranteed under the city’s handover from British colonial rule to Chinese sovereignty in 1997.

According to the laws presented to the council on Wednesday, the chief executive would have the right to order the extradition of wanted offenders to China, Macau and Taiwan as well as other countries not covered by Hong Kong’s existing extradition treaties.

As a safeguard, such orders could be challenged and appealed against through the city’s courts.

Government officials have said no one at risk of the death penalty or torture or facing a political charge could be sent from Hong Kong. They earlier exempted nine commercial crimes from the new provisions after pressure from business groups.

“It is absolutely not the case that a single person or organization can complete the whole process,” Cheng said.

The laws will be debated by a council committee and are expected to be passed later this year.

The government has justified the swift introduction of the changes by saying they are needed so that a young Hong Kong man suspected of murdering his girlfriend in Taiwan can be extradited.

“Many Hong Kong people have no trust or confidence in the Chinese judicial system,” she told the government-funded radio station RTHK. Fair trials were not possible on the mainland, she said.

Hong Kong’s Bar Association said on Tuesday the government’s watering down of the changes did nothing to ease fundamental unease over differences with the Chinese system.

Under the Basic Law, which enshrines Hong Kong’s separate system until 2047, Hong Kong is allowed to continue a British-style legal system that remains part of the common law.

Fugitive property tycoon Joseph Lau launched legal action in a Hong Kong court on Monday challenging the retroactive nature of the bill. Lau is seeking to avoid extradition to neighboring Macau, where he was sentenced in 2014 to more than five years on corruption and money laundering charges.

Chen Zhimin, a former deputy minister of public security, told reporters in Beijing last month mainland authorities already had a list of more than 300 fugitives who are in Hong Kong.