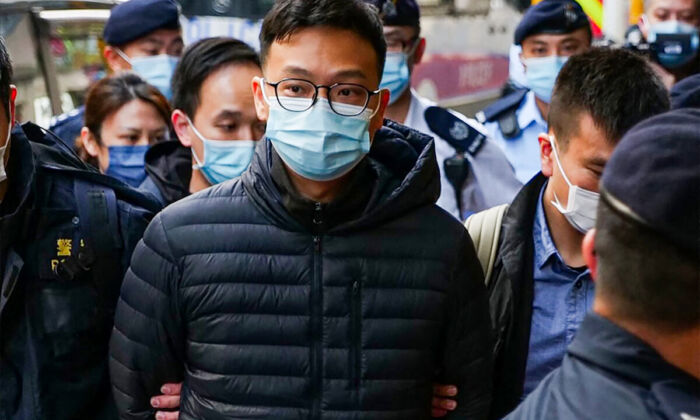 Dorothy Li
Dorothy Li is a reporter for The Epoch Times based in Europe.
View profile
Follow
and Frank Fang

A Hong Kong court on Dec. 30 denied bail to two former senior editors from Stand News charged with conspiracy to publish “seditious” material. They were among seven arrested a day earlier in a police crackdown on their pro-democracy media outlet that drew international condemnation.

Chung Pui-kuen, the outlet’s former chief editor, was the only defendant who appeared in the West Kowloon Magistrates’ Court Thursday.

Patrick Lam, who was acting editor-in-chief at Hong Kong’s Stand News before he resigned following his arrest on Wednesday, applied for bail by his lawyer as he was in hospital.

The same charge was brought against Best Pencil (Hong Kong) Limited, the organization behind the now-shuttered Stand News. The independent online media outlet announced it would shutter operations on Wednesday, hours after 200 national security officers raided its office, froze its assets worth roughly $7.8 million, and arrested two current and former editors and four former board members.

Those arrested were accused of engaging in the “conspiracy to publish seditious publications” under a colonial-era ordinance.

Four former board members, including pop singer and activist Denise Ho, barrister Margaret Ng, and Christine Fang, were released from police custody on Thursday afternoon, according to local media outlets. They were not charged yet.

Chan Pui-man, Chung’s wife and a former editor at the pro-democracy, now-shuttered Apple Daily, still remained in custody after being re-arrested on Wednesday.

U.S. Secretary of State Antony Blinken on Wednesday urged Beijing and Hong Kong authorities to “cease targeting Hong Kong’s free and independent media and to immediately release those journalists and media executives who have been unjustly detained and charged.”

“A confident government that is unafraid of the truth embraces a free press,” Blinken said in a statement.

Zhao Lijian, China’s foreign ministry spokesperson, defended Hong Kong’s police during a daily briefing on Dec. 30, saying the action “has nothing to do with freedom of press or freedom of speech” but to “maintain social order in Hong Kong.”

Zhao denounced international criticism, stating “no country, organization or individual has the right to interfere in Hong Kong affairs.”

Meanwhile, Zhao told reporters at the briefing that the communist regime is imposing sanctions on five current and former U.S. officials, in response to Washington’s efforts to pressure Beijing over its suppression of democracy in Hong Kong. The targets include former Commerce Secretary Wilbur Ross and U.S-China Economic and Security Review Commission Chairman Carolyn Bartholomew.

Unlike other mainland cities, Hong Kong had once enjoyed press freedom, which is protected by the city’s mini-constitution, known as the Basic Law. The Chinese regime had promised to preserve this and other rights guaranteed under Basic Law when the city was transferred from British rule in 1997.

Over the years, the regime has introduced a series of measures resulting in a steady rollback of the city’s autonomy and democracy, especially following the national security legislation. Since the vaguely-worded legislation took effect, Hong Kong police have arrested more than 100 pro-democracy proponents, leading to more than 60 charges—mostly against democratic politicians, activists, journalists, and students.

Wednesday’s arrest drew concern from many international rights groups. “With these high-profile arrests, Hong Kong authorities are using the law as a weapon of censorship and forced silencing,” Julie Trébault, director of the Artists at Risk Connection at PEN America said in a statement.

In response, a spokesperson for the Hong Kong government said freedom of speech and freedom of the press “can be restricted for reasons including protection of national security,”

The authorities added they would “guard against any acts endangering national security, and will bring any person or entity violating the law to justice regardless of background.”

Stand News’ UK bureau has also ceased operation, the bureau’s chief, Yeung Tin-shui, announced on his Facebook page on Thursday. Yeung added that he has also resigned from his position.

The closure of Stand News came just half a year after that of Apple Daily. The popular local newspaper Apple Daily, which was frequently critical of the city’s government and the communist regime in Beijing, printed its last edition in June after 500 police raided its newsroom, arrested five executives, and froze key assets. Authorities say dozens of the paper’s articles may have violated the national security law.

Apple Daily’s founder, media tycoon Jimmy Lai, is currently serving a 20-month jail time for taking part in pro-democracy protests in 2019. He is also waiting for trial on three national security charges. Under the law, Lai could face up to life in prison.

Hong Kong Epoch Times Staff and The Associated Press contributed to this report.