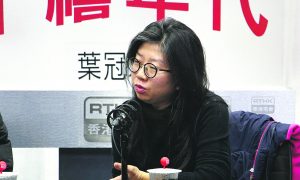 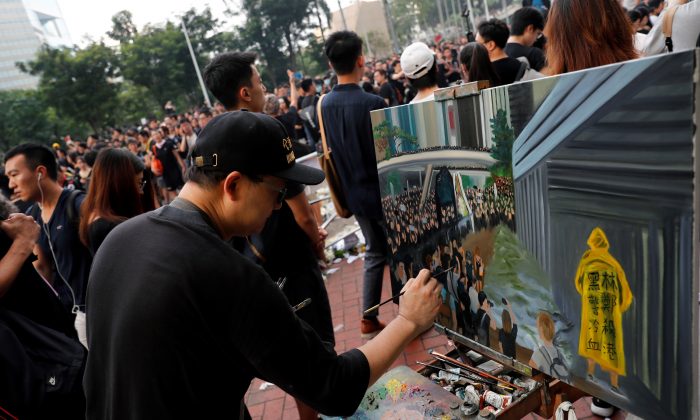 HONG KONG—For 53-year-old Perry Dino, a paintbrush and canvas are weapons for opposing the Hong Kong government as it faces mass protests against a now-suspended bill that would allow extraditions to mainland China.

Dino, who has painted many of Hong Kong’s social movements including the pro-democracy Umbrella Movement in 2014, considers it important to record what is happening in the Chinese-ruled city.

“I am already one of those standing on the front line to defend Hong Kong,” Dino told Reuters.

Hong Kong’s government has indefinitely suspended the bill that would allow criminal suspects to be sent to mainland China for trial in courts controlled by the Communist Party.

However, activists, mostly students in face masks, hard-hats and goggles, are demanding the bill be fully withdrawn.

The bill has seen millions of people, fearing erosion of freedoms promised when Hong Kong returned to Chinese rule in 1997, throng the streets in protest, plunging the former British colony into a political crisis.

Braving tear gas, rubber bullets and beanbag rounds earlier this month when protests turned violent, Dino says he has drawn and painted as much as he can about the mass rallies.

“I hope the future generation can understand what Hong Kong has gone through,” he said.

Dino, a part-time teacher, says he hopes that when Hong Kong has true democracy, he can donate his artwork to a “democracy progression museum”.

None of his artwork is currently for sale.

“Making how much money doesn’t matter to me. Only the future matters,” he said.

Among his paintings, which feature colorful brushstrokes, are ones showing demonstrators’ tents occupying major thoroughfares and a flower-etched tribute to a protester who fell to his death.

One painting depicts police firing tear gas, with thick plumes of smoke billowing across a mass of demonstrators. An abstract canvas shows activists shielding their eyes as they flee while a police officer with a rifle grins.

Since he started doing protest artwork in 2012, Dino has joined the annual June 4 Tiananmen vigil and he made 25 paintings during the 2014 umbrella movement, when protesters paralyzed parts of the financial hub for 79 days.

Dino said that during protests, Hong Kong police have told him to paint somewhere else.

In the mainland, Chinese censors strive to erase or block news or depictions of the protests.

Dino is confident he can keep doing what he is doing.

“They can’t hack into my computer and delete it like a photo, nor can they destroy it with a baton as I can always fix my painting,” he said.