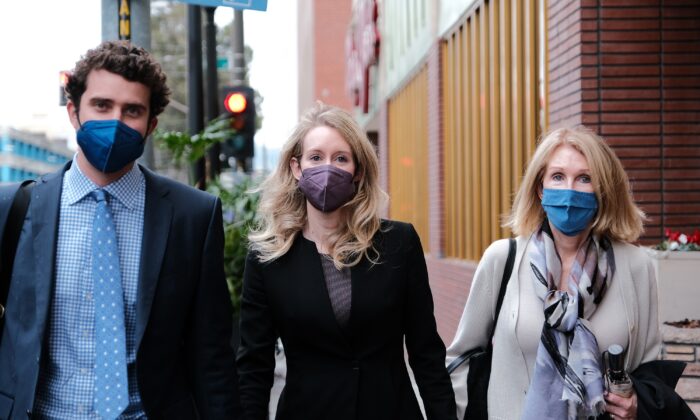 Billy Evans walks with his partner Elizabeth Holmes, and her mother Noel Holmes, as they leave the Robert F. Peckham Federal Building in San Jose, Calif., on Dec. 23, 2021. (David Odisho/Getty Images)
US News

SAN JOSE, Calif.—The jury weighing fraud charges against former Theranos CEO Elizabeth Holmes on Monday said it is deadlocked on three of the 11 felony counts against her. Holmes is accused of duping investors and patients about a blood-testing technology that she hailed as a medical breakthrough.

After receiving a note from the jury, U.S. District Judge Edward Davila summoned the eight men and four women back to the courtroom where Holmes’ trial took place. He urged them to re-examine their positions while adhering to their instructions to only return a guilty verdict if convinced beyond a reasonable doubt.

“Take as much time as necessary. There is no hurry,” Davila emphasized.

The jury then returned to its deliberations, which have now taken more than 40 hours so far. They have sent out three notes, but Monday’s marked their first communication to the judge that directly addressed potential verdicts.

Monday’s note also means that jurors have agreed on verdicts on eight of the charges facing Holmes. Nine of the 11 counts are fraud charges and two revolve around a conspiracy to commit fraud from 2010 to 2015. During that time, Holmes became a Silicon Valley sensation, one worth $4.5 billion fortune on paper based on her promise that Theranos’ technology would revolutionize health care.

If convicted of any of the charges, Holmes, 37, could face up to 20 years in federal prison.

Holmes was present at Monday’s hearing to review the jury’s note. She looked across the courtroom at the jurors when they walked in and walked out, but none appeared to return her glance. Once the jurors were gone, Holmes turned around and hugged her mother, who was sitting behind her. Her father then kissed her forehead through his mask, which court rules require of everyone present.

After starting Theranos in 2003 as a 19-year-old college dropout, Holmes began working on a technology that she repeatedly promised would be able to scan for hundreds of health issues with just a few drops of blood taken with a finger prick instead the conventional method requiring a needle to be stuck in people’s arms before samples were sent off to labs.

Holmes believed she could provide more humane, convenient, and cheaper blood tests by “mini-labs” in Walgreens and Safeway stores across the United States, using a small testing device dubbed “Edison” in homage to the famous inventor.

The concept proved to be so compelling that Theranos was able to raised more than $900 million from a long list of elite investors, including savvy billionaires such as media mogul Rupert Murdoch and software magnate Larry Ellison.

But most people didn’t know Holmes’ dirty secret back then: Theranos’ blood-testing technology kept producing misleading results, forcing the company to secretly rely on conventional machines made by Siemens in a traditional laboratory setting. Evidence presented at the trial also showed Holmes lied about purported deals that Theranos had reached with big drug companies such as Pfizer and the U.S. military.

The deception eventually backfired in 2015 after a series of explosive articles in The Wall Street Journal and a regulatory audit of Theranos’ lab uncovered potentially dangerous flaws in the company’s technology.