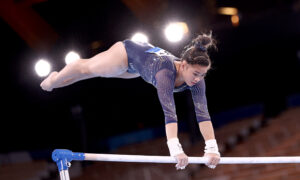 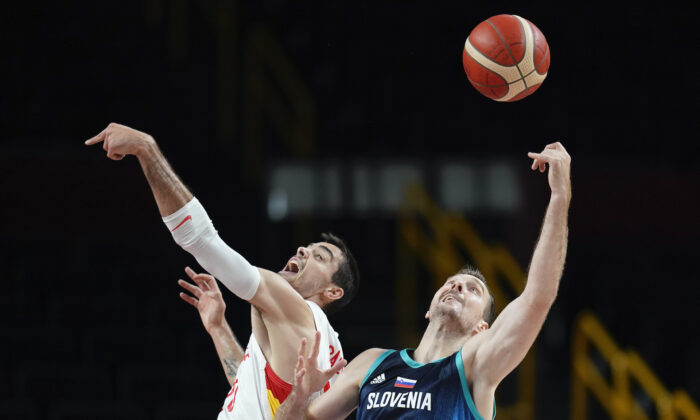 Spain’s Alberto Abalde fights for a rebound with Slovenia's Zoran Dragic (30) during a men's basketball preliminary round game at the 2020 Summer Olympics in Saitama, Japan, on Aug. 1, 2021. (Charlie Neibergall/AP Photo)
Tokyo 2020 Olympics

Hello, Again: US and Spain to Meet in Olympic Men’s Basketball Quarterfinals

And at the Tokyo Games, the top teams in the FIBA world rankings will meet again—just earlier than has been the norm.

The three-time reigning Olympic champion Americans will face reigning World Cup champion Spain in the quarterfinals of the men’s tournament at the Tokyo Games on Tuesday, a matchup of teams that finished second in their respective groups at the Olympics.

Spain fell outside of the seeded pool, and knew it had exposed itself to a potential matchup with the United States, by losing the group-play finale to Slovenia on Sunday. And about an hour later, when FIBA held the Olympic draw, the matchup was set.

“This Olympics is just going to get better as far as basketball is concerned, because the teams are all pretty passionate and very talented and have a lot of individual players that people will enjoy on TV,” U.S. coach Gregg Popovich said.

Australia guard Joe Ingles said nobody would be thrilled about a 10 a.m. start.

“You have no choice, so you’ve got to figure out a way to get up and get going, and this opportunity we’ve got, I think our guys will be ready for 10 a.m. or 9 p.m., whichever part of the day it is,” Ingles said.

The Italy–France winner will play the Slovenia–Germany winner in one semifinal, and the U.S.–Spain winner plays the Australia–Argentina winner in the other. The quarterfinals are win-or-go-home; a victory means teams are assured of two more games—the semifinals followed by a gold- or bronze-medal contest—before leaving Tokyo.

“Everybody knows that there are no easy opponents, especially USA, Australia, France, those kind of teams,” Slovenia guard Zoran Dragic said. “That’s why everybody wanted to be first in their group.”

The United States, which lost to France in the Olympic opener, got into the seeded pot of the draw by finishing as the top second-place team. That meant it couldn’t face any of the group winners in the quarterfinals, but also had to play another second-place finisher—in this case, either Italy or Spain.

Once Italy was drawn to play France, the matchup was clear: The U.S. and Spain would meet again.

And in terms of the world rankings, the brackets for the Olympic quarterfinals are unusual: No. 1 plays No. 2 in the USA–Spain contest, and No. 3 Australia plays No. 4 Argentina. The other matchups, by world ranking, are No. 7 France against No. 10 Italy, and No. 16 Slovenia against No. 17 Germany.

France and Italy have gone 14–14 against one another in FIBA and Olympic play. Slovenia is 4–3 against Germany, and Australia and Argentina have split six previous meetings.