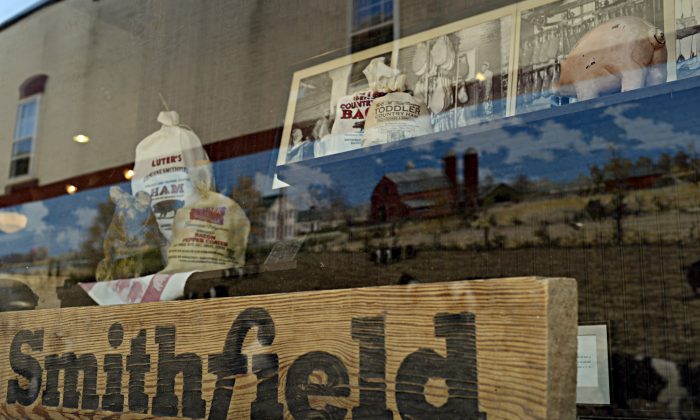 Hams and other memorabilia are displayed at a restaurant in Smithfield, Va. on May 29, 2013. (Amanda Lucier/The Virginian-Pilot via AP)
Business & Economy

Hedge Fund Could Thwart Chinese Takeover of US Pork

An activist investor could scuttle a proposed bid by China to acquire Smithfield Foods Inc., the biggest U.S. pork processor and hog producer.

On Monday, the hedge fund Starboard Value LP sent a letter to the board of Smithfield, arguing that the company should split its businesses and sell them individually, instead of going forward with a proposed $4.7 billion sale, including debt, to a Chinese meat processor.

Smithfield runs and outsources farms across the nation, and markets pork products under the brands of Armour, Cook’s, Smithfield’s and Farmland.

Last month, the Virginia-based Smithfield agreed to sell itself to Chinese company Shuanghui International for $34 per share.

[b]Carving Up Smithfield[/b]
Smithfield last Friday announced less-than-stellar earnings of 21 cents per share, or $29.7 million, for the quarter ending April 29.

While revenues gained 3 percent, the 63 percent profit drop was mainly driven by an increase in costs, leading to an 18 percent decline in profit margins quarter over quarter. Feed prices had increased and the company could not pass the higher prices on to consumers.

Revenues were higher on packaged food products but exports of meat declined, especially to China and Russia. Due to the pending sale, Smithfield executives did not hold a conference call with analysts or investors.

The shares initially rose 28 percent on the announcement of the deal on May 28 and then gave back 2 percent, trading mostly sideways. After Starboard sent its letter to the board seeking a breakup, shares rose a modest 0.85 percent Monday June 17.

Starboard, at 5.7 percent ownership, is one of the biggest single shareholders in Smithfield. The fund argued that the company’s vertically integrated operation is less valuable than the sum of its parts. Breaking the company into discrete businesses and selling to individual buyers would unlock far more investor value than its proposed sale to the Chinese firm.

“We believe there are numerous interested parties for each of the Company’s operating divisions, and that a piece-by-piece sale of the Company’s businesses could result in greater value to the Company’s shareholders,” wrote Jeffrey C. Smith, managing member of Starboard, in its letter.

In its analysis, using metrics from Bloomberg, Capital IQ (a division of Standard & Poor’s), and SEC filings, Starboard proposed that a sale of its parts would generate the equivalent of between $43.85 and $55.21 per share, far more than what Shuanghui had offered. The fund used industry benchmarks, current hog prices, and discounted cash flows to derive its estimated valuation of the company’s parts.

Even before Starboard’s involvement, Smithfield and Shuanghui executives had argued against breaking up the company. In fact, Starboard’s argument may have gained greater traction had it proposed this scenario earlier. According to NY Times’s Dealbook, Continental Grain Co., one of Smithfield’s biggest shareholders at the time of the acquisition was an advocate of breaking up the firm. However, it sold virtually all of its shares in June after Smithfield shares jumped.

Shuanghui is a Hong Kong-based holding company and the major owner of Henan Shuanghui Investment & Development, China’s biggest meat processor. It also owns a slew of other food and processing firms across China.

On the surface, Smithfield management views this as an inroad into the Chinese market, and China is the biggest consumer of pork products accounting for almost half of global consumption. For Shuanghui, the acquisition of Smithfield grants the company a new supply of pork, and could alleviate some of the health concerns Chinese consumers have over food safety.

[b]Smithfield’s Role[/b]
Smithfield, as the nation’s biggest hog producer, has transformed the landscape of the industry in merely a few decades.

“Smithfield embodies a command-and-control form of meat production that now dominates,” wrote columnist Christopher Leonard in the Journal Star, a newspaper based in Lincoln, Neb. “Central planners analyze market trends and decide when to cut or boost production on farms nationwide, snuffing out the kind of transparent, competitive trading markets that most people associate with capitalism.”

“Instead, Smithfield sets the price of hogs through its confidential contract terms with farmers. In short, the system has characteristics more often associated with communism than capitalism,” he continued.

In essence, Smithfield has replaced the model of farmers owning their own stock and selling them on the open market, to having farmers as caretakers of hogs working for Smithfield. The result after a few decades is that Smithfield (along with other large pork producers) is largely able to control the market price for pork.

[b]Food Safety Concerns[/b]
By and large, Smithfield’s centralized operation was able to keep the U.S. hog supply steady and its pork products relatively void of defects.

But these circumstances could change drastically under the control of a Chinese owner. Shuanghui has been mired in food safety controversy in China. In March 2011, the company sold meat tainted by illegal additives, which made hogs leaner but were harmful to humans.

Even if Shuanghui pledges to tighten up its controls, it is doubtful they can be enforced in a nation where food safety laws have been difficult to enforce at best, and widely ignored at worst.

In a bid to reassure customers, Chairman Wan Long said in a Bloomberg report Shuanghui purchases all slaughter and processing equipment from the United States and Europe.

While most analysts expect that the goal of this deal is to help increase exports of U.S. meat to China, one cannot discount the possibility of Shuanghui exporting Chinese products to the United States, especially given the cost advantages.

This is not good news for the consumer. Recent cases of food safety lapses in China include a bust near Shanghai of vendors selling rat and fox meat masquerading as lamb, and cases of thousands of dead pigs floating down a river.

“No one can deny the unsafe tactics used by some Chinese food companies,” states Sen. Chuck Grassley (R-Iowa). “[T]o have a Chinese food company controlling a major U.S. meat supplier, without shareholder accountability, is a bit concerning.”

Grassley also brought up the concern of independent farmers losing access to competitive marketplaces to sell their stock. Grassley’s state of Iowa and other plains states are large hog producers and could be affected.

However, the deal has not been approved by the authorities yet and could ultimately not go through. The Department of Justice and the U.S. Committee on Foreign Investment is currently reviewing the pending deal between Smithfield and Shuanghui.