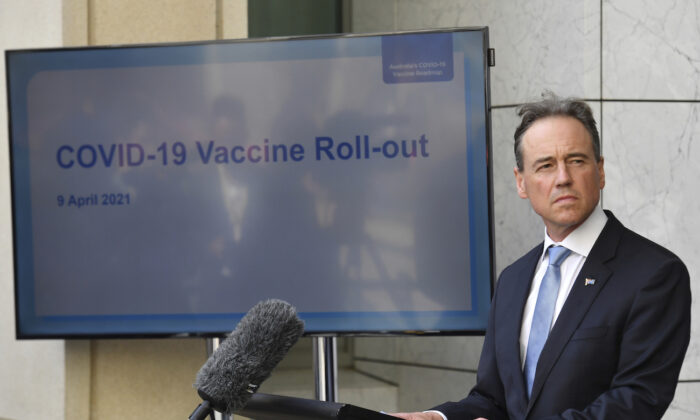 Andrews said while Pfizer supply may be limited in the future, stocks of AstraZeneca and Moderna vaccines were readily available.

“Don’t queue up for the thing that we don’t have a lot of, go and access the products that are safe, that have got approvals,” the premier said.

Hunt, a senior Victorian in the federal cabinet, said the number of Australians getting coronavirus vaccines was increasing despite Mr Andrews’ comments.

“I understand today is a difficult day for Victoria, and I may detect a pattern on such days. I could say something, but I won’t. I will just give the facts,” Hunt said.

“For the first time, over two million Australians had been jabbed in seven days. That is an immense national achievement.”

The latest figures showed more than 337,000 vaccines were administered on Wednesday, the second-highest single-day total since the rollout began.

More than 74 per cent of the eligible population over 16 have now received a first dose, while 49.3 per cent have been double dosed.

But some Australians may need a third vaccine dose to be best protected against the virus, the federal government’s vaccine advisory body has announced.

The Australian Technical Advisory Group on Immunisation is closely monitoring international data on the efficacy and safety of additional doses – which include booster shots and third jabs – with advice likely to be issued in the next few weeks.

“ATAGI anticipates that a relatively small cohort of individuals, such as those with severely immunocompromising conditions, are likely to require a third dose as part of their primary course of vaccination to ensure optimal vaccine effectiveness,” it said in a statement on Thursday.

Some 1847 new locally acquired COVID-19 cases were reported across Australia on Thursday.

NSW detected 1063 cases and six deaths, with the state’s Delta outbreak surpassing 50,000 infections, while Victoria recorded 766 – the state’s highest tally of the pandemic.