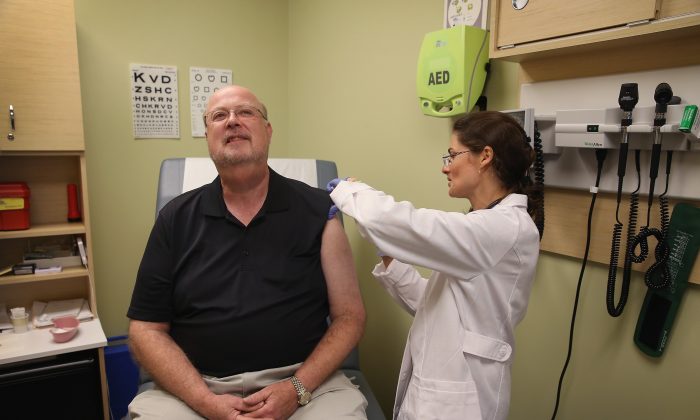 A file photo of a man receiving a flu shot. (Scott Olson/Getty Images)
US

WASHINGTON—A consensus is growing about how to contain health care costs. It means paying doctors and hospitals a new way.

Rachel Nuzum, vice president at The Commonwealth Fund, said fee-for-service reimbursement provides the wrong incentives. She said there is substantial agreement among policymakers about problems with fee-for-service.

We need to transition to a system that “rewards better health outcomes and focuses on using resources efficiently,” Nuzum said. It’s better “to pay for value, not volume.”

Fee-for-service does nothing to reward “care coordination or chronic disease management.” It does not reward providers that reduce costs, according to Paul Ginsburg, Ph.D., and president at Center for Studying Health System Change.

The most recent figures available show that the health care sector was $2.7 trillion in 2011, an increase of nearly 4 percent over 2010, according to Alliance for Health Reform. The rate has stayed the same since 2009 when the Great Recession began. It is much lower now than the nearly 6 percent average annual rate during the previous decade, but that may change as the economy recovers.

The same source states that the health care sector in 2011 makes up 17.9 percent of the gross domestic product (GDP), according to the World Bank. It is a higher share of GDP than that of any other developed country. The comparable figure for France was 11.6 percent in 2011. The share of GDP for health care in 1980 was only 9.2 percent, wrote Ginsburg. He points out in a paper in Health Affairs, “Controlling health care spending will be a critical element in long-term deficit reduction.”

The recent slowdown in growth is progress, but growth still exceeds inflation. Moreover, under the Affordable Care Act, the Medicaid expansion and insurance premium credits “will leave federal and state budgets even more vulnerable to health care cost trends than in the past,” wrote Ginsburg.

Politicians agree that growth in health care expenditures—government and private—needs to be slowed down. Rising health care costs threaten state and federal budgets. Businesses and individuals are looking at higher premiums, deductibles, and copays.

The Alliance for Health Care and The Commonwealth Fund held a briefing on Capitol Hill, Dec. 13. The speakers, mindful of the controversy surrounding health care in this country, sought to find common ground about how to stem spending growth.

Ginsburg observed that the consistency in vision among the various proposals that Nuzum studied to diminish the role of fee-for-service payment in medical care “is very striking.”

In general, strategists want to transition away from fee-for-service within a decade, he said. Some have said altering the payment system by 75 percent is doable, but Ginsburg said that they are silent on how to reach that goal.

A value-based payment model is gaining support. In an editorial published in the Washington Post, a bipartisan group—Tom Daschle, Bill Frist, Pete Domenici, and Alice Rivlin—wrote, “Until better care is prioritized over more care, our nation will continue to face a problem with health care costs. … Health care practitioners can be encouraged through rewards to focus far more on what is best for their patients and less on the number of tests and procedures they can order.”

Len Nichols, professor of Health Policy at George Mason University in Fairfax, Va., said persuading a provider to transition to an alternative payment system is complex because providers are a diverse group. Health care is ultimately local and circumstances differ. He noted that some providers cling to fee-for-service. He said incentives need to be geared to providers, who want, or at least are willing, to make the change.

Nichols told the Senate Budget Committee, July 30, that the Centers for Medicare and Medicaid Services (CMS) had done well in launching experiments “to test delivery and payment reforms.” But a major effort is needed.

“To make the transition to an alternative payment model we must know what and how we want to pay [those who are trying to transition away from fee-for-service],” Nichols said, adding “maybe we need a Manhattan Project” to work out the math for a new way of paying under “a lot of different circumstances.”

“New payment methods are needed to motivate providers to pursue new care delivery approaches and to support those who succeed in reducing the unnecessary use of services,” Ginsburg stated. There are some promising experiments and pilot payment reform programs “which allow providers to share some of the savings achieved when they deliver care at lower cost than budgeted.”

None of the private initiatives, however, are going to effect universal change “unless Medicare and Medicaid also aggressively pursue consistent provider payment approaches,” according to Ginsburg. “Medicare payment policy is a key lever in pushing the system forward,” Ginsburg said at the briefing.

“Medicare must lead because it is the biggest player,” Nichols said.

The pilot programs are a start, but they are voluntary. Ginsburg said the experimental plans become policies that apply to all providers. Providers that refuse to accept the new approach to care would be reimbursed less as a penalty.

Nichols said, “We can’t change our payment systems overnight. But the evidence is building that we can achieve the triple aim of cost containment, quality of care, and population health if we free our creative imagination.”

According to Nuzum, raising the age of eligibility for Medicare was not recommended by any proposals except that of Simpson–Bowles, the presidential commission created in 2010.