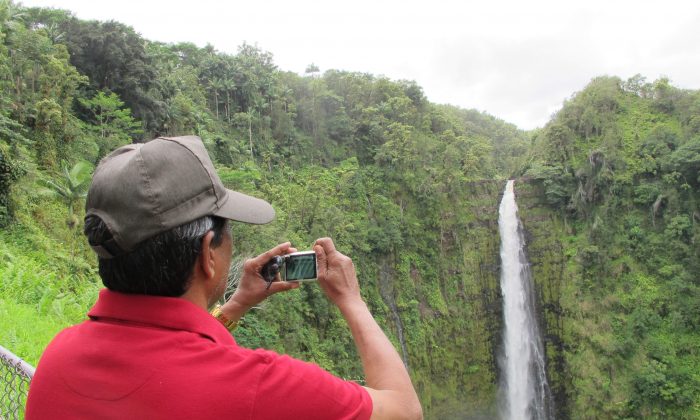 HILO, Hawaii—Nina Wild and Andreas Maeder were planning to go out for a nice dinner after flying to Hawaii from Switzerland. But the manager of the bed and breakfast where they stayed near Hawaii Volcanoes National Park told them that wasn’t a good idea.

“She laughed and told us ‘No, no, we have a hurricane. You can’t go, everything’s closed,'” Wild said.

Instead, the couple was treated to a homemade meal at the bed and breakfast. They were among thousands of visitors to Hawaii adjusting their expectations of paradise this week as two hurricanes threatened to hit the islands.

Strong Oklahoma Earthquake Felt as Far Away as Arizona

Oahu, Maui, Lanai, Molokai and Kahoolawe were under a hurricane watch Friday as Hurricane Lester surged closer to the islands. Hurricane Madeline threatened the Big Island earlier in the week but was downgraded to a tropical storm and passed without causing major damage.

Lester weakened to a Category 2 but was expected to remain a hurricane as it passes north of the islands Saturday and Sunday, said meteorologist Bob Burke of the National Weather Service. Large waves from 15 to 25 feet are expected to pound east-facing shores of major islands, he said.

Around Hawaii, tourists who had been planning an escape to a sunny island paradise were making the most of their vacations.

Julie Harrison said she was a little nervous the hurricanes would ruin her trip to the Big Island but she decided to come regardless.

“It’s enough of an experience that I just wanted to come out anyway and make it out no matter what,” said Harrison during a stop to see the bubbling crater at Kilauea volcano’s summit.

“I’ve only been here since yesterday and already it’s amazing, being able to see the volcanoes and beaches,” said Harrison, who lives near Buffalo, New York.

Two other relatives — one in her 60s and another in her 90s — who were going to come with her delayed their trip by about a week because of the storms.

“We want to allow people to continue to plan to camp, but we want to ask those campers to pay attention…be ready,” Caldwell said. “It’s going to be a wet weekend.”

Caldwell said that officials are not expecting a major impact from Hurricane Lester, but they’re preparing for the worst just in case.

“If you’re not an experienced ocean person, I would advise staying out of the water completely,” Rigg said.

The storm’s center isn’t expected to make landfall. But if the storm veers to the south it could have a much greater impact, said Ian Morrison, meteorologist from the National Weather Service.

Tourism officials said they hadn’t heard of mass cancelations of trips or other major impacts to the tourism industry.

“Those that are really dead set on coming to Hawaii no matter what are still coming, and then there are those who are looking to postpone their trip to a later date if it doesn’t cost too much to change their airfare,” said Mufi Hannemann, president and CEO of the Hawaii Lodging and Tourism Association. “Everybody’s got their guard up and we’re watching closely, but nothing to suggest that they need to cancel their trips or go home early because of a pending hurricane coming this way.”

Stephen Small, who was visiting the Big Island from Los Angeles, said hurricane threats didn’t keep him from traveling because if disaster had struck he would’ve been glad to help out.

“On the other side of the coin, when you’re just out trying to relax and have a good time, you kind of try to pray that the hurricane go another route and take another route and leave you alone for the time you’re here,” Small said.