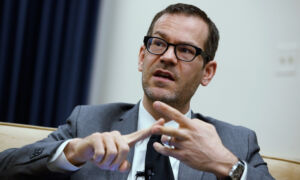 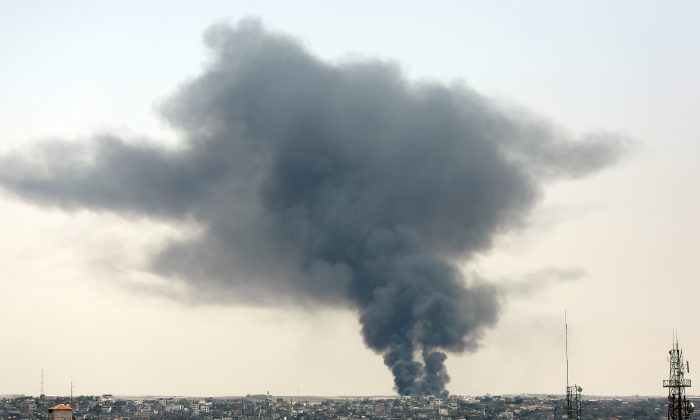 Smoke rises after a cargo crossing between Israel and Gaza was shelled on Saturday, July 12, 2014. Israeli airstrikes targeting Hamas in Gaza hit a mosque and a center for the disabled where two women were killed Saturday, raising the Palestinian death toll from the offensive to more than 120, Palestinian officials said. (AP Photo/Hatem Moussa)
Middle East

Hamas is apparently not responding to the United Nation’s call for a cease fire between Israel and Palestine.

According to CBC’s Derek Stoffel, Hamas, the current Gaza strip rulers, have gone on air and announced that they will fire rockets at Israel city Tel Aviv today at 9:00 p.m. Palestine time (2:00 p.m. EDT).

Earlier, the UN released a council statement approved by all 15 members that called for a de-escalation of the conflict and a restoration of direct negotiations between the Israelis and the Palestinians.

He added that the Palestinians will be watching closely to see if the Israelis respond to the council’s call, stressing that if they don’t “we have a lot of tools in our arsenal.”

See an Associated Press story below about the Israeli-Palestinian conflict.

GAZA CITY, Gaza Strip (AP) — Israel widened its air assault against the Gaza Strip’s Hamas rulers on Saturday, hitting a mosque, Hamas-affiliated charities and an Islamic home for the disabled, as Palestinians said the death toll from the five-day offensive rose to over 125.

While Israel vowed to press forward with its 5-day-old campaign, it found itself facing growing international calls to stop. In New York, the U.N. Security Council unanimously called for a cease-fire, while Britain’s foreign minister said he would be discussing cease-fire efforts with his American, French and German counterparts on Monday.

The 15-member Security Council issued a press statement calling for a de-escalation, restoration of calm and a resumption of Mideast peace talks. The press statement, which is not legally binding but reflects international opinion, was the first response by the U.N.’s most powerful body.

An Israeli official said the goal of the operation is to restore quiet to Israel for a continuous period. “This goal will be achieved whether it is done militarily or diplomatically. Israel will consider any suggestion that will bring the accomplishment of this goal,” the official said, speaking on condition of anonymity because he was not authorized to talk to the media.

The military said it has struck more than 1,100 targets, including Hamas rocket launchers, command centers and weapon manufacturing and storage facilities, in a bid to stop relentless rocket fire coming Gaza. Officials in the territory said that two women were killed in the attack on the disabled center.

The central Gaza mosque was being used to conceal rockets like those militants have fired nearly 700 times toward Israel over the past five days, the military said. However, the strikes in the densely populated Gaza Strip show the challenge Israel faces as it considers a ground operation that could potentially pose further dangers to civilians.

Gaza Health Ministry spokesman Ashraf al-Kidra said Israeli strikes raised the death toll there to 127, with more than 920 wounded. Among the dead was a nephew of Ismail Haniyeh, a top Hamas leader, who was killed in an airstrike near his home, Hamas officials said.

Hamas militants have been hit hard. Though the exact breakdown of casualties remains unclear, dozens of the dead also have been civilians. Israel has also demolished dozens of homes it says are used by Hamas for military purposes.

“Am I a terrorist? Do I make rockets and artillery?” screamed Umm Omar, a woman in the southern town of Rafah whose home was destroyed in an airstrike. It was not immediately known why the building was targeted.

The offensive showed no signs of slowing down Saturday as Israeli Defense Minister Moshe Yaalon said his country should ready itself for several more days of fighting.

“We have accumulated achievements as far as the price Hamas is paying and we are continuing to destroy significant targets of it and other terror organizations,” Yaalon said after a meeting with top security officials. “We will continue to punish it until quiet and security returns to southern Israel and the rest of the country.”

Hamas said it hoped the mosque attack would galvanize support for it in the Muslim world.

“(It) shows how barbaric this enemy is and how much it is hostile to Islam,” said Husam Badran, a Hamas spokesman in Doha, Qatar. “This terrorism gives us the right to broaden our response to deter this occupier.”

The Israeli military released an aerial photo of the mosque it hit, saying Hamas hid rockets in it right next to another religious site and civilian homes. It said Hamas, Islamic Jihad and other Gaza militant groups use religious sites to conceal weapons and establish underground tunnel networks, deliberately endangering civilians.

Critics say such allegations are too sweeping, and that Israel’s heavy bombardment of one of the densely populated territories is itself the main factor putting civilians at risk.

Israel issues early warnings before attacking many Gaza targets and the military says it uses other means to do its utmost to avoid harming bystanders. But Michaeli said civilians have been killed when Israel bombed family homes of Hamas militants or when residents were unable to leave their homes quickly enough following the Israeli warnings.

The “Iron Dome,” a U.S.-funded, Israel-developed rocket defense system, has intercepted more than 130 incoming rockets, preventing any Israeli fatalities so far. A handful of Israelis have been wounded by rockets that slipped through.

Militant rockets have reached further into Israel than ever before, with air raid sirens sounding even in the northern city of Haifa, 100 miles (160 kilometers) away.

On Saturday, air raid sirens went off in Jerusalem, about 45 miles (70 kilometers) from Gaza, for a third time. The rocket landed near the Palestinian city of Hebron in the West Bank, damaging a house but causing no injuries.

The frequent rocket fire has disrupted daily life in Israel, particularly in southern communities that have absorbed the brunt of it. Israelis mostly have stayed close to home. Television channels air non-stop coverage of the violence and radio broadcasts are interrupted live with every air raid siren warning of incoming rockets.

The frequent airstrikes have turned the normally frenetic Gaza City into a virtual ghost town during the normally festive monthlong Ramadan holiday, emptying streets, closing shops and keeping hundreds of thousands of people close to home where they feel safest from the bombs.

The offensive is the heaviest fighting since a similar eight-day campaign in November 2012 to stop Gaza rocket fire. The outbreak of violence follows the kidnappings and killings of three Israeli teenagers in the West Bank, and the kidnapping and killing of a Palestinian teenager in an apparent revenge attack.

Israeli Prime Minister Benjamin Netanyahu has vowed to press on with the campaign until there is a halt to rocket attacks. Israel has massed thousands of troops along the border in preparation for a possible ground invasion, with soldiers atop vehicles mobilized and ready to move into Gaza if the order arrives.

A senior military official said Saturday that Israel estimated Hamas still had thousands of rockets in its arsenal and it would take Israel more time to eliminate the threat to its civilians.

“There is no knockout. It is more complicated,” he said, speaking on condition of anonymity because of military guidelines.

Israel asserts it has strong support from its allies to hammer Hamas, but it has begun coming under international pressure as Palestinian casualties have grown.

In London, Foreign Minister William Hague of Britain, a close Israeli ally, said he had spoken to his Israeli counterpart and called for an “immediate de-escalation” and expressed his “deep concern” about civilian casualties.

He called for “urgent, concerted international action to secure a cease-fire” and said he would discuss that goal with his American, French and German counterparts in Vienna on Monday.

The Arab League said foreign ministers from member states will hold an emergency meeting in Cairo on Monday evening to discuss the continued Israeli offensive and measures to urge the international community to pressure Israel.

Egypt, which historically has served as a mediator between Israel and Hamas, appears less eager to help out this time. Hamas was particularly close to the Muslim Brotherhood, who the current leadership banned after driving it from power last year.

Still, it has tried to show support for Palestinians by opening its crossing with Gaza, allowing deliveries of food and medical supplies and evacuation of some wounded.