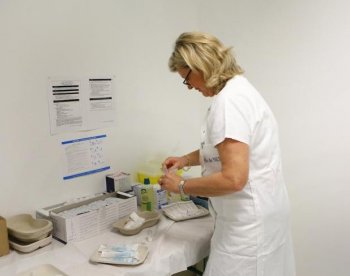 Stephanie Lam
View profile
Follow
biggersmaller
Print
Sweden’s Medical Products Agency (MPA) has started to investigate H1N1 vaccine Pandemrix, which has been linked to narcolepsy in children and adolescents, on the request of the European Commission.

So far, twelve confirmed cases of narcolepsy have been reported after patients received the Pandemrix vaccine. Apart from Sweden and Finland, where most of the cases were reported, there have also been cases reported in France, Germany, and Norway.

“Narcolepsy is a rare sleep disorder that causes a person to fall asleep suddenly and unexpectedly,” according to an MPA press release.

“Its precise cause is unknown, but it is generally considered to be triggered by a combination of genetic and environmental factors, including infections.”

According to a 2009 report published by the European Medicines Agency, fatigue is one of the most common side effects of Pandemrix.

“The role of the vaccine in these cases is still unclear and under investigation,” said Dr. Jane Ahlqvist Rastad of the MPA.

“A number of different reasons may be behind the observed rise in the incidence of narcolepsy: A (H1N1) infection, vaccination, a compound effect of infection and vaccination, or some other factor entirely. Infections in general are known to cause narcolepsy,” said a press release of the Finnish National Institute for Health (THL).

Rastad says over six million doses of the vaccine have been used in Sweden, which has a total population of 9.3 million. Rastad said that there are other vaccines available, but Pandemrix was chosen for the Swedish vaccination campaign.

On Tuesday, the THL proposed suspending Pandemrix until the investigation is completed.

According to another report, published in 2008, on the characteristics of Pademrix on the website of the European Medicines Agency, the vaccine has to be stored between 2°C and 8°C (35.6 – 46.4°F) and cannot be frozen. The 2009 report stated that the vaccine should be used within 24 hours after mixing.

“Caution is needed when administering this vaccine to persons with a known hypersensitivity (other than anaphylactic reaction) to the active substance, to any of the excipients, to thiomersal and to residues (egg and chicken protein, ovalbumin, formaldehyde, gentamicin sulphate and sodium deoxycholate),” the report says.

According to the 2009 report, Pandemrix was released after three studies about its effects. The studies were conducted on people aged between 18 to 60 years, over 60 years, and between 6 and 35 months, respectively.

Sweden physicians are focusing their investigation on a group of children aged 12 to 16 who developed narcolepsy symptoms one or two months after the vaccination. This vaccine’s effect on this age group was not studied before the vaccine's release.