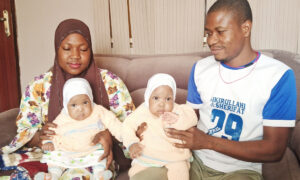 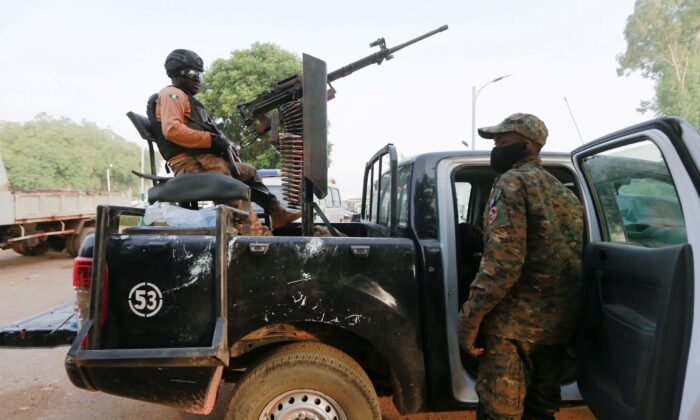 A soldier sits on one of the trucks used to bring back the girls who were kidnapped from a boarding school in the northwest Nigerian state of Zamfara, following their release in Zamfara, Nigeria, March 2, 2021. (Afolabi Sotunde/Reuters)
Africa

KADUNA, Nigeria—Gunmen kidnapped around 30 students in an overnight raid on a forestry college in northwest Nigeria, an official said on Friday, the fourth mass school abduction since December in a country where violence is on the increase.

An armed gang broke into the Federal College of Forestry Mechanization, located on the outskirts of Kaduna city near a military academy, at around 11:30 p.m. (2230 GMT) on Thursday, Kaduna state’s security commissioner, Samuel Aruwan said.

After a distress call, the army rescued 180 people in the early hours of Friday but “about 30 students, a mix of males and females, are yet to be accounted for,” he said.

“A combined team of army, air force, police and DSS (Department of State Services) troops are conducting an operation to track the missing students.”

The city is the capital of Kaduna state, part of a region where banditry has festered for years. Hours before the kidnapping, Nigeria’s federal government said it would “take out” abductors after earlier criticizing local deals to free victims.

Kaduna resident Haruna Salisu said he had heard sporadic gunshots at around 11:30 p.m. on Thursday from the area of the compound, where the concrete perimeter wall had a large hole in it on Friday.

“We were not panicking, thinking that it was a normal military exercise being conducted at the (nearby) Nigerian Defense Academy,” he said by phone.

On Friday morning, relatives of students gathered at the gates of the college, which was surrounded by around 20 army trucks.

The trend of abduction from boarding schools was started by the Islamic terrorist group Boko Haram, which seized 270 schoolgirls from a school at Chibok in the northeast in 2014. Around 100 of them have never been found.

Within the last few weeks, 279 schoolgirls were freed after being abducted from their boarding school at Jangebe in northwest Nigeria’s Zamfara state. In the north-central state of Niger, 27 teenage boys were released after being kidnapped from their school, along with three staff and 12 family members. One student was shot dead in that attack.

Military and police attempts to tackle the gangs have had little success, while many worry that state authorities are making the situation worse by letting kidnappers go unpunished, paying them off, or providing incentives.

In Zamfara, state government officials said they had given ‘reformed bandits’ access to land for cattle grazing, while also building schools and medical facilities. They do not specifically identify the recipients as kidnappers.

In late February, the presidency said President Muhammadu Buhari had urged state governments to “review their policy of rewarding bandits with money and vehicles, warning that the policy might boomerang disastrously.”

Buhari held talks with security officials and traditional leaders on Thursday to discuss the country’s multiple security challenges. The national security adviser, Babagana Monguno, after the talks said the government would take a tough stance on criminal gangs.

“The new direction of government is to come out with full force. We have decided to apply the full weight of the law. We will come down on them wherever we locate them and take them out,” he told reporters in the capital, Abuja, without providing further details.

The unrest has become a political problem for Buhari, a retired general and former military ruler who has faced mounting criticism over the rise in violent crime, and replaced his long-standing military chiefs earlier this year.