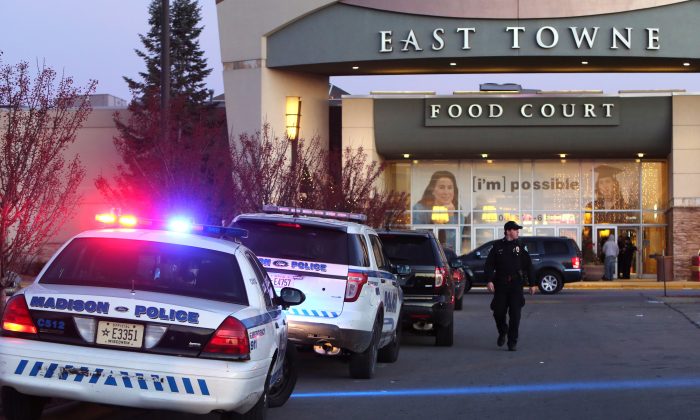 Authorities respond to reports of shots fired at East Towne Mall in Madison, Wis., Saturday, Dec. 19, 2015. Madison police said one person was shot in the leg during a "disturbance" inside the mall but his injuries are not life threatening. (Amber Arnold/Wisconsin State Journal via AP)
US

Gunfire Erupts at Mall in Madison, Wisconsin on One of Busiest Shopping Days of Year

MADISON, Wis.—Gunfire erupted Saturday inside a large Wisconsin shopping mall on one of the busiest shopping days before Christmas, leaving a man wounded in the leg, police said.

The East Towne Mall in Madison was shut down after the shooting broke out just before 3 p.m. on the Saturday before Christmas. According to a statement posted on its website, Madison police said they were still looking for a suspect.

Witnesses told police that several young men were involved in a “disturbance” in the middle of the mall. One pulled out a handgun and fired at least one round. A 19-year-old man involved in the initial dispute was struck in the leg. He was taken to the hospital with a non-life-threatening injury.

“My understanding is it was a chaotic scene,” DeSpain said. He said the mall remained closed late Saturday afternoon.

Police said the mall had been secured by late afternoon.

Photos from the scene showed several police officers and a number of police vehicles outside the mall. A notice on the mall’s website said the mall “is temporarily closed due to a safety concern.”

East Towne Mall is an 840,000-square-foot shopping center with 110 specialty retailers, according to its website.