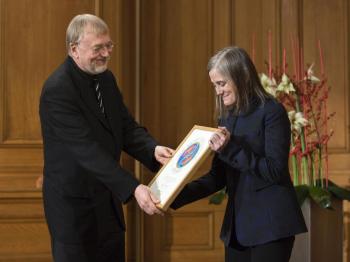 Group Concerned After Journalist Grilled at Border About Olympics

Helena Zhu
View profile
Follow
biggersmaller
Print
VANCOUVER—The interrogation of an award-winning U.S. journalist at the Canada-U.S. border has prompted the Canadian Association of Journalists (CAJ) to ask for reassurances from the federal public safety minister that similar incidents will not occur in the future.

Amy Goodman, a well-known journalist and broadcaster who visits Canada regularly, was detained for about 90 minutes and interrogated along with two colleagues as they crossed the Washington-British Columbia border on Nov. 25.

Goodman said she was detained because Canadian Border Services Agency (CBSA) officials were concerned she was going to criticize the 2010 Olympics while in Canada. She said the agents didn’t believe her when she told them her visit was part of a tour to promote her new book, “Breaking the Sound Barrier.”

“I said, ‘Is this routine?’ He [the customs officer] said, ‘This is what we’re doing,’” Goodman told CBC News. “I felt under siege. I felt monitored and surveilled. I felt, as a journalist, violated.”

Goodman’s notebook and computer were scrutinized, as were those of her two colleagues. The car they were travelling in was also searched.

CAJ wants Public Safety Minister Peter van Loan to explain Goodman’s detention and give a guarantee that similar incidents will not recur, especially in the approach to the Olympics which starts on February 12, 2010.

“We’re quite concerned that other journalists might get stopped on their way into Canada and sort of be grilled about what’s in their notebook or what they’ve written about the Olympics and that kind of thing. We just think that’s completely at odds with our values as Canadians,” says CAJ president Mary Agnes Welch.

Welch points out, however, that it’s highly unusual for journalists to be interrogated upon entering Canada.

“We want to leave open the possibility this could have just been an over-zealous border agent, so this could just be a one-off thing that won’t happen again. But we’re worried that this might become a more common occurrence given the sensitivity that surrounds the Olympics.”

Although Goodman is known for her outspoken views opposing the war in Iraq and Afghanistan, she said border agents repeatedly asked her if she was sure she wasn’t coming to Canada to speak about the Olympics.

She said at first she thought they were asking her about President Barack Obama’s trip to Copenhagen in early October to make a pitch for holding the 2016 Summer Games in Chicago.

Goodman is host of Democracy Now, a radio and television show aired by 800 public and college broadcasters across North America.

Although he ultimately allowed her to enter the country, Goodman was told to leave Canada within 48 hours and report to CBSA when she leaves.

CBSA hasn’t commented on Goodman’s case specifically, citing privacy concerns. However, CBSA spokesperson Faith St. John told the Vancouver Sun that there are many reasons why someone may be detained while coming into Canada.

“It’s not an accusation of a wrongdoing,” she said.