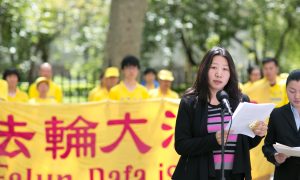 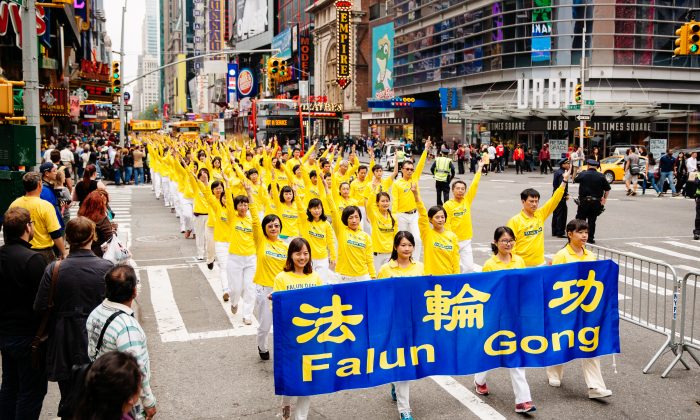 Around 10,000 people took part in a parade calling for an end to the persecution of Falun Gong in China
By Larry Ong

Larry Ong
Journalist
Larry Ong is a New York-based journalist with Epoch Times. He writes about China and Hong Kong. He is also a graduate of the National University of Singapore, where he read history.
View profile
biggersmaller
Print

NEW YORK—On May 13, around 10,000 practitioners of the spiritual discipline Falun Gong, or Falun Dafa, from 53 countries strolled down 42nd Street in a grand parade, the centerpiece event of World Falun Dafa Day celebrations this week. New Yorkers and tourists observing the event expressed admiration and support for the practice, and condemned the Chinese regime’s brutal persecution campaign.

A proxy agent of the regime did briefly appear in the streets alongside the parade, but ended up arrested by the NYPD.

Falun Gong parade contingents and performers gathered on Dag Hammarskjold Plaza on 2nd Avenue in the morning, and the procession, which commenced at midday, finished at 12th Avenue near the Consulate General of the People’s Republic of China near the Hudson River.

I really feel honored and happy to be part of this really grand parade.
— Ghazal Tavanaei, Iranian Falun Dafa practitioner

Donning bright yellow t-shirts, most practitioners held banners promoting Falun Gong’s three core tenets, and calling for the Chinese regime to end the persecution of the practice. Three large marching bands turned heads with trumpets and bass drums. Beaming women tapped out traditional rhythms on their waist drums. Other participants pushed floats and carried flags, or donned the clothing of their own ethnic groups.

“Tradition comes from nature, and nature comes from the universe,” said Oleksandr Nimenko, a practitioner from Kyiv, Ukraine who is in the film business. Nimenko was dressed in a vyshyvankas, a traditional Ukrainian costume that incorporates embroidery to convey information about a person.

“Falun Dafa supports and encourages traditional culture,” he added. “And that’s the reason why people are here, to show their own culture through the basic principles of the universe: truthfulness, compassion, tolerance.”

Falun Dafa may at its root be an ancient Chinese spiritual discipline, but the practice’s moral teachings and five sets of slow-motion, meditative exercises have broad appeal. One parade section was comprised entirely of practitioners from around the world in Bavarian, Korean, Peruvian, Ukrainian, Iranian, and other ethnic traditional costumes.

This international congregation has come together for a very worthy purpose.
— Marsha Allen, Parade onlooker

Ghazal Tavanaei, an ebullient 22-year-old from Iran, said that practitioners from her country had decided to don their festive traditional dress to show the world the “peaceful and beautiful” side of Iran, as opposed to the sombre “political stuff” in news broadcasts.

“I really feel honored and happy to be part of this really grand parade,” she said, sparkling in a silvery white dress. “Falun Gong is practiced by people of all nationalities and races, and it’s really beautiful to see everyone united together for one cause.”

Yi Rong, a spokeswoman for the Falun Dafa Association in New York, said in an interview: “Before the persecution started in 1999, there were a hundred million practitioners in China … and Falun Dafa spread to over a hundred countries in the world. Although the Communist Party has not ceased its persecution, which is in its 17th year, practitioners are still persevering in resolutely and rationally opposing the persecution.”

Speaking before the start of the parade, Tavanaei said she hoped that the parade watchers in New York would appreciate their freedoms, and remember that “in China, people are not even allowed to believe in truthfulness, compassion, and tolerance.”

The event also saw an unexpected guest drop in — Li Huahong, the defendant in a lawsuit brought by Falun Gong practitioners for battery and hate crimes.

She was arrested for assault by police outside the Pfizer building on 42nd street, near the start of the parade route. “She punched somebody in the face,” said a police source, who confirmed the arrest.

It is unclear precisely what happened in the incident, but interviews with witnesses indicated that Li had been handed materials about Falun Gong, and then reacted violently.

A video obtained by Epoch Times shows the moment she is taken aside by police, but not the behavior that got her into trouble. Her actions appear to have infuriated onlookers, however. At the end of the video, two pedestrians — not participants in the Falun Gong parade, nor, it seems, individuals with any connection to Falun Gong — can be seen walking past expressing their dissatisfaction with hand gestures.

Word From the Street

Most onlookers had a much more positive experience. Parade spectator Marsha Allen, who was visiting New York from North Carolina, was appreciative of the ethnic costumes. “This international congregation has come together for a very worthy purpose,” she said.

The march, which spanned almost the entire breadth of Manhattan, from 2nd Avenue to its terminus at 12th avenue, took the Falun Gong practitioners past business students in suits outside Grand Central, past Verizon strikers near Bryant Park, and past DSLR-toting tourists with backpacks in Times Square.

A Chinese businessman who supplies furniture for companies, and was just visiting the United States, was watching the procession around 4th avenue with a Falun Gong flier in his hand.

Richard Naclerio, a history professor in boat shoes, took the march, and the persecution of Falun Gong, as a launching point for a general discussion with a reporter about good government. Some government intervention in the economy is desirable, he said, “But when you ratchet it up to communism politically, it becomes totalitarianism. Absolute power breeds absolute corruption.”

Naclerio also conveyed a straightforward understanding of the motive for the comprehensive persecution of Falun Gong in China. “It’s about the propagation of fear. If there is a way to not be afraid, a communist government will immediately take away that right, because fear is so important for control.” He added, brandishing the Falun Gong flier he had just received: “And things like this make people happy—they have no fear.”

Daycare provider Monique Forest was shepherding the young Gideon Marcus-Trask for the day, and felt lucky that they happened to come across the march. “I try to avoid Times Square, but truthfulness, compassion and tolerance? We want to know about that with every child I watch.”

Nadia Khan, a New Yorker, upon hearing about the persecution in China, and in particular about organ harvesting from Falun Gong practitioners, was angry with the fact that she hadn’t read about it before. “Everyone talks about the Holocaust and how people were killed, then but there is so much that goes in this world that we don’t know about. What does the media show us? It’s all reality garbage. I didn’t know about this. I’m just surprised and shocked.”

Near Bryant Park, a Chinese tourist wearing aviator glasses and a denim jacket clasped a Falun Gong flier along with her outsize smartphone. When approached, she cautiously remarked that she knew a number of friends who practiced Falun Gong in China, some of whom had been persecuted. “A lot of people in China are very sincere believers in this faith,” she said. “You definitely can’t bring up this issue in China,” she added.

Frank Xu, a student of media studies in New York from mainland China, said: “I think it’s great… Before, I hadn’t had too much contact with this. But now I see it I think it’s quite healthy. I have some friends who’ve practiced it.”

Mark Aynsley, a school teacher in Japan, was leading his students to attend a Model United Nations conference at the Grand Hyatt hotel when the parade drew his attention. “Anything that raises awareness is a good thing obviously … it’s quite shocking actually, this persecution.”

Larry Ong
Journalist
Larry Ong is a New York-based journalist with Epoch Times. He writes about China and Hong Kong. He is also a graduate of the National University of Singapore, where he read history.
TOP NEWS