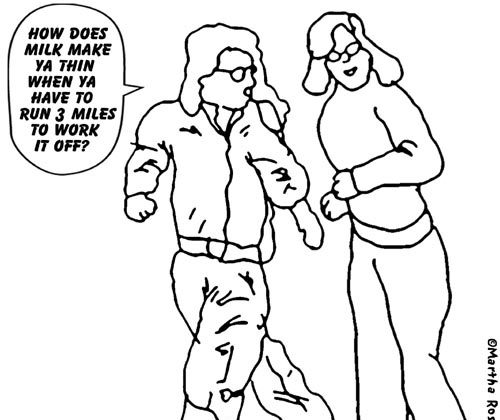 Got Milk Ads Amuse but Milk Sales Continue to Fall

Selling milk looks easy and even fun when you see the “Got Milk?” celebrity mustache ads. In fact, it is neither. Despite almost 20 years of mustache ads, milk sales continue to fall at a fast clip. Why? According to the milk groups responsible for the marketing, the National Dairy Promotion and Research Program and the National Fluid Milk Processor Promotion Program, calcium-fortiﬁed juices and vitamin-enhanced beverages have supplanted milk’s healthy image and the public’s preference for milk itself may be changing.

Many demographic groups shun milk from teenagers and young adults who prefer almost anything else to dieters, athletes and health-food eaters who reject the cholesterol, fat, calories and allergens. Several ethnic groups also avoid milk, as do the lactose intolerant, people who drink or smoke, animal and environmental activists. In fact, Dr. Benjamin Spock, whose pediatric advice shaped the entire Baby Boom generation, recommended no milk for children after age two, in his later years, to reduce their risks of heart disease, obesity, high blood pressure, diabetes and diet-related cancers.

To reverse the trend of fewer milk drinkers every year, marketers have tried everything. Before the “Got Milk?” mustache ads, they ran a “Milk: It Does a Body Good” campaign in the late 1990s, which targeted young women with the message that milk would prevent osteoporosis in later life. The problem was, teens, tweens, and young women worry about getting osteoporosis when they get old just about as much as they worry about skin cancer from sunbathing. Who’s gonna get old?

Then marketers landed on the idea of milk as a diet food.  “Studies suggest that the nutrients in milk can play an important role in weight loss,” said milk ads that kicked off the Great American Weight Loss Challenge in 2006. “So if you’re trying to lose weight or maintain a healthy weight, try drinking 24 ounces of low-fat or fat-free milk every 24 hours as part of your reduced-calorie diet.”

Suggestions for losing weight with milk included “Grab a carton of milk at the drive-through instead of a soda.” “Sip on a cappuccino or latté instead of black coffee.” “Enjoy a banana and glass of milk for a mid-morning snack.” “Add milk to risotto and rice dishes for a creamier texture.” “Order a milk-based soup like corn chowder, potato leek, or cream of broccoli soup as a ﬁrst course at dinner.” And even “Make a ‘mocktail’ in a goblet with milk and sugar-free hazelnut syrup” and “Milk your dessert with puddings or custards.”  Sounds like a “diet” that would add a pound a day!

One market that used to be steady for milk marketers was chocolate milk, a favorite with children. But as youth obesity grows, school districts have banned the flavored milks because of their high sugar content, prompting milk producers to add artificial sweeteners such as aspartame to the product. Now, consumer groups are objecting because milk marketers have petitioned the FDA to omit listing the artificial sweeteners on the label. And some school districts say the artificially sweetened flavored milks will still be banned because they just trade one undesirable ingredient for another. END