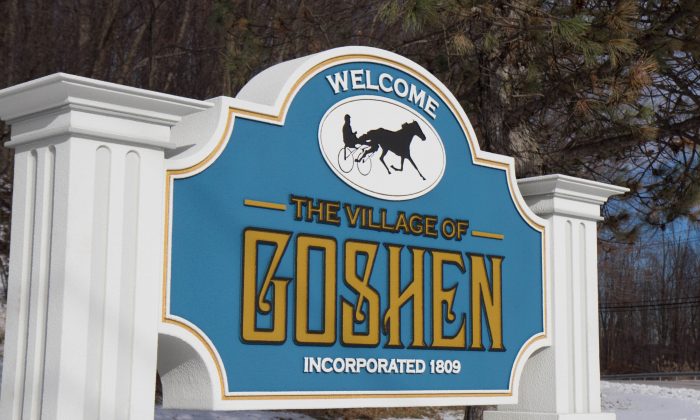 A sign on the corner of Greenwich Avenue and Clowes Avenue in Goshen on Jan. 24, 2016. (Holly Kellum/Epoch Times)
New York

VILLAGE OF GOSHEN—While the village of Goshen’s proposed budget is $51,865 more than last year, most people’s tax bills will remain the same because of a bigger tax base, said Mayor Kyle Roddey.

“The proposed budget is under the New York State tax levy cap—they call it a 2 percent tax cap, but it is below 1 percent this year,” Roddey said at the March 14 village meeting. “I don’t think the average home owner will see an increase in their taxes.”

There were some big increases in this year’s budget over last year, like a $357,989 increase for salaries in the police department, $51,041 for recently filled positions in DPW (Department of Public Works), $79,784 for workers compensation and Social Security, and $79,615 for hospital and medical insurance.

There are some savings in the budget as well, like $80,306 for an unfilled position at the DPW; $100,000 expected revenue from forfeited bail, fines and permits; and a 3 percent decrease in the water fund. But $252,796 came from the fund balance, the village’s rainy day fund, to keep the budget below the tax cap.

“Our revenue is pretty stable and our expenses are going up every year, whether it is health insurance or salaries, etcetera,” Roddey said in a phone interview. “We decided to use the fund balance only because we have enough money there where we can still have the amount left over that we need to have a healthy fund balance.”

There will be a public hearing for the budget on April 11 at 7:00 p.m. in Goshen Village Hall. The budget becomes final after the village board votes on it.