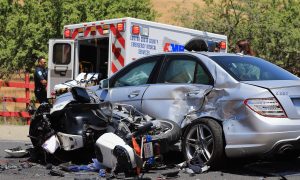 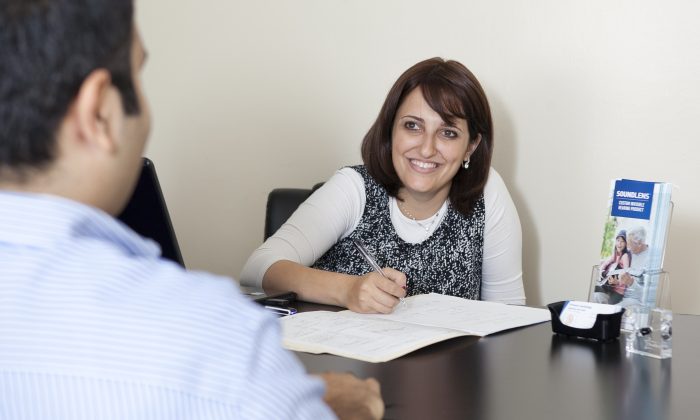 NEW YORK—We Americans are accustomed to having our vision checked every year and our teeth checked twice a year. But we often overlook our hearing.

Nearly one in five adults has hearing loss, according to National Institute on Deafness and Other Communication Disorders (NIDCD). By the time today’s adults reach the age of 85, half of them will be hard of hearing. Yet only 20 percent of all sufferers seek help, and on average, they wait to take action until 10 years after the initial diagnosis.

“They have a problem hearing, but they think it’s not such a big deal,” said Dr. Natalya Levi of Primary Audiology in Manhattan.

Common thoughts about early-stage hearing loss are: So what if I missed one or two things? I can still hold a one-to-one conversation. I just have trouble with background noise.

A year passes and people manage by reading lips and using contextual clues to understand what’s being said.

But hearing loss is irreversible. Soon people begin to avoid large social gatherings where the noise level is high. Eventually though, even crossing the street becomes dangerous because people can’t hear the oncoming traffic.

Levi has seen transformations in people who, with the help of the right hearing aid, are able to delight in long-forgotten sounds. She’s seen lives and relationships dramatically improved. But she’s also seen patients who refuse treatment until they can no longer avoid social obligations. At that point, the problem becomes harder to correct, she said.

Holding out is understandable. In our aging-phobic culture, admitting that our bodies no longer work like they used to hurts our pride and sense of independence. But letting hearing degenerate makes life unnecessarily difficult, both for the person with the hearing loss and the people in his or her life.

One patient Levi treated was in his 30s. During meetings, he had to have coworkers write him notes to explain what was being said.

“He had already waited a long time. This is someone very bright, very warm, very educated,” Levi said. “This was a new experience for him. He had to first accept that he had a hearing loss.”

“Our ears are not what really hear. It’s our brains that really hear,” Levi said. “The ears are a device that brings information to the brain. By [the time most people seek treatment], the brain hasn’t been receiving information correctly for a long time.”

The parts of the outer and middle ear funnel and amplify sound into the auditory nerve, which carries information to the brain. With prolonged hearing impairment, the brain’s hearing center atrophies and loses its ability to correctly interpret sound.

Hearing aids help only to amplify and deliver sound. How that sound is received in the brain is not something a hearing aid can help.

“That’s why I tell patients to address the problem early on before their brain forgets how to interpret sound.”

Hearing loss is gradual, but the speed of degeneration depends on the individual. Some people lose their hearing over decades; others might see their condition dramatically worsen between one year and the next.

Different hearing aids have different properties. Besides looking different, some amplify certain ranges better than others, some excel at reducing background noise, and others pick up peripheral sounds well. Some loop behind the ear, others are hidden away in the ear canal.

The doctors at Primary Audiology are holding free consultations and screenings Oct. 7–11 to introduce invisible SoundLens hearing aids, a device that fits deep in the ear canal.

Despite the common perception of the hard-of-hearing senior, those 60 and older are not the only ones who suffer from hearing problems. Hearing problems often begin in middle or early adulthood or even childhood.

Breakage of nerve cells inside the cochlea (a spiral-shaped cavity in the inner ear) is the biggest contributor to hearing loss. Once the damage occurs, it is not reversible and can only be mitigated with a hearing aid.

The development of normal hearing is a primary concern at this stage of life. “If something is not normal, there is a delay in speech production,” Levi said.

The state of New York mandates that hospital audiologists conduct hearing screenings on all infants born in the hospital.

If there is fluid buildup behind the eardrum, which is normal, it should clear up within two weeks. Parents should follow up after two weeks if the infant does not pass the initial screening.

If significant hearing loss is identified, the child can be taken to a specialist for a hearing aid or cochlear implant.

Hearing is critical in school, so a child with hearing problems is at a double disadvantage.

“Other kids can be very mean to them about wearing hearing aids, so a lot of times they reject hearing aids.”

Children who need hearing aids have to wear a conventional device because the outer ear is still growing, said Levi. After that age, the teen can switch to a more discreet device.

Some new models look like Bluetooth devices, and they can hook up to phones and music players. They are available in a variety of natural-looking colors, too.

For young people without hearing problems, prevention is key. Limit exposure to loud music and television. Wear earplugs during concerts and music rehearsals.

According to the NIDCD, 17 percent of the adult population has hearing loss. Loud noise damages auditory hair cells and leads to ringing in the ears. Adults with hearing loss tend to experience a reduced ability to distinguish speech from background noise.

Workplace conditions are a major contributor to adult hearing loss. According to OSHA, noise may be a problem in your workplace if you experience the following: