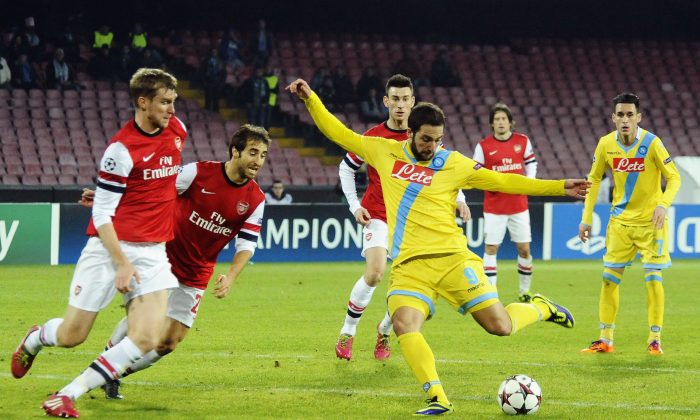 Napoli striker Gonzalo Higuain could leave in the summer.

According to the Express, Napoli boss Rafael Benitez will off load the 26-year-old Argentine because he has a replacement in on-loan Chilean striker Eduardo Vargas.

Vargas has been on-loan to Gremio and Valencia in the past few seasons because he failed to fit into Benitez’s plans with underwhelming performances.

However, Benitez is said to be reconsidering his decision to sell the Chilean and instead incorporate him back in the Napoli squad because Vargas has performed excellently in the 2014 World Cup so far.

As for Higuain, Barcelona are said to be lining up a £45 million ($76.6 million) transfer fee for him.

Arsenal, Chelsea, and Manchester United are also said to be interested.

Here is an Associated Press article on Argentina.

BELO HORIZONTE, Brazil (AP) — The first week of the World Cup has exposed signs of an identity crisis in Argentina, with coach Alejandro Sabella and captain Lionel Messi presenting different visions of how the team should play.

Sabella talks about being flexible and adjusting the formation depending on the opponent, while Messi says Argentina — being the football power that it is — should stick to its attacking style regardless of who it plays.

The difference in perspective was underscored by Messi’s thinly-veiled criticism of how Sabella lined up the team in Argentina’s opening 2-1 win over Bosnia-Herzegovina in Group F.

The coach fielded a cautious formation with five defenders, three midfielders and two strikers, before switching in the second half to the 4-3-3 system that Messi prefers.

One by one, other Argentina players have come out siding with Messi, saying they also believe in a three-man attack, while denying that there’s a rift between the players and the coach.

“He (Messi) gave his opinion, like many others did. And that’s it,” backup goalkeeper Mariano Andujar said Wednesday. “There is no problem. Everyone is free to have their opinion.”

After the Bosnia match, Sabella acknowledged that the team played better in the second half, when Messi, who scored in the 65th minute, dropped behind Sergio Aguero and Gonzalo Higuain in a three-man forward line. He is likely to stick with that formation against Iran on Saturday.

But the issue appears to extend beyond numbers. Sabella and Messi don’t speak the same language when they talk about Argentina’s core identity as a football team.

Before the game, Sabella dismissed questions about Argentina being among the “favorites” to win the World Cup, saying he dislikes the word. Then he admitted that — on the eve of the match — he hadn’t yet decided how the team should play against the attack-minded Bosnians.

His uncertainty contrasted with Messi’s confident assertion this week that “We are Argentina,” and that a team of such stature should concentrate on its own game, not on how the opponents play.

“I think we need to look at ourselves first and not focus on the rival,” Messi said.

That’s the philosophy the four-time world player of the year is used to at Barcelona, with which he’s won six Spanish league and three Champions League titles.

It’s also the attitude of Spain’s national team, which has dominated world football with its tiki-taka style in recent years but which crashed out of the Brazil tournament with two consecutive losses. It was an exit that illustrated the risk of not having a plan B when things go wrong.

Argentina’s style of football has changed over the years, from Cesar Luis Menotti’s entertaining side that won the World Cup in 1978 to Carlos Bilardo’s cynical team that reached the 1990 final (and lost 1-0 to West Germany) despite scoring just five goals in the tournament.

Most of the current Argentine players favor the offensive 4-3-3 formation that Sabella relied on during the qualifying campaign. But Andujar said a more cautious alternative could be useful if Argentina faces one of the big football powers later in the tournament.

“Personally I think that above all we have to think about ourselves,” Andujar said. “But we can’t ignore the fact that opponents can complicate things for you, and you have to look for ways to counteract the strengths that they have.”