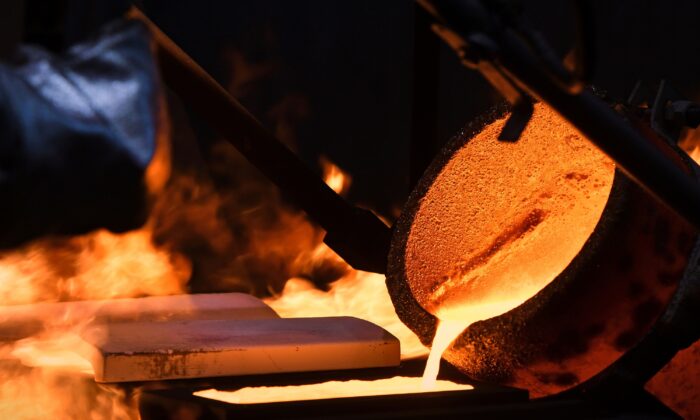 An ingot of 99.99 percent pure gold is cast at the Krastsvetmet non-ferrous metals plant in the Siberian city of Krasnoyarsk, Russia, on March 10, 2022. (Alexander Manzyuk/Reuters)
Markets

Gold prices hovered near their lowest level in two months on Thursday, as expectations of aggressive U.S. policy tightening boosted the dollar and added pressure on non-yielding bullion.

“With the Fed seen hiking interest rate by 50 basis points and possibly 75 basis points in the next two meetings after the May 4 (meeting), the dollar is going to remain in demand… For that reason it’s very difficult to be bullish on gold at the moment,” said Fawad Razaqzada, market analyst at City Index.

The dollar index surged to its highest level since December 2002 amid widespread weakness in its major rivals.

The U.S. currency shot past the key level of 130 yen for the first time since 2002 as the Bank of Japan doubled down on its dovish policy, in stark contrast to expectations that U.S. interest rates are about to start going up fast.

For gold, in the event of further downside, the next level on watch may be at $1,850 an ounce, Yeap Jun Rong, a market strategist at IG, said in a note.

Gold has declined about 2.7 percent this month, which could be its biggest monthly fall since September as the Fed has started to raise interest rates to tame the fastest U.S. inflation in four decades.

Rising U.S. interest rates increase the opportunity cost of holding non-yielding gold, while also boosting the dollar, in which it is priced.