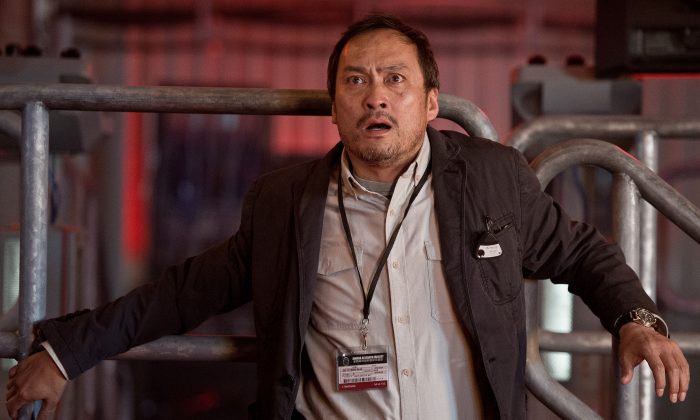 And there, ladies and gentlemen, you have Godzilla in a nutshell. He’s large, and the movie’s largely a crashing bore. The reviewer had to slap himself, largely, in the face to stay awake. You’re welcome.

Flash back to an atomic mushroom cloud, reminding us of the 1950s nuclear origin of many of America’s present superheroes, and Godzilla.

Can a Godzilla film be extricated from its Japanese origins? Hiroshima? Nagasaki? In light of that, this is actually the perfect time for a Godzilla flick, considering Fukushima, which is alluded to. But the original Godzilla was a bad guy. Nuclear explosions are bad! It was a monster movie. This Godzilla unintentionally saves San Francisco. That sort of makes him a good guy. But first things first.

So in the 2014 update, we start off in Japan with nuclear-plant scientists Joe Brody (Bryan Cranston) and wife Sandra (Juliette Binoche). They’re experiencing some large, on-the-job tremors, as is Dr. Ishiro Serizawa (Ken Watanabe). They investigate the cause of these quakes, which becomes an obsession for Joe.

This earth-tremoring turns out to be caused by flying monsters called MUTOs—Massive Unidentified Terrestrial Organisms. (Can you say “Mothra”?) Actually, they look a little cockroach-like. These large moth-roaches feed on radiation.

Later on, at a mining site in the Philippines, they dig up a ribcage. It’s large. In the original, Godzilla got disintegrated at the end, with only his ribcage left over at the bottom of the ocean. Could this be that self-same ribcage? Does Godzilla have relatives? Does the tension build? In a word, no.

Later still, we go to San Francisco. Joe’s kid, Ford (Aaron Taylor-Johnson), is a Navy Explosive Ordnance Disposal guy. Ford’s long been fed up with dad’s tremor obsession, but they are reunited when dad gets arrested in Japan for nosing around new tremors and needs bailing out.

These MUTOs—It turns out there’s a male and female. So what we’re witnessing is a sort of behemoth 17-year cicada cycle, or a MUTO-mating love story. Amid all the explosions, it’s kind of hard to tell what is going on.

Eventually His Largeness, Sir Lizard, crosses paths with the MUTOs and has a city-stomping showdown with the big bugs. He gets all radioactive and does the stolen-from-Jurassic-Park tyrannosaurus scream (or did “Jurassic Park” steal from the 1954 “Godzilla”?).

But the main thing is that they’re so gigantic and explosion-causing and panic-causing and building-toppling all by themselves, that by the time you get to Godzilla (about an hour in), there’s nowhere to escalate to. It’s anticlimactic. Even with the military deploying weapons of mass destruction. It’s so large, it’s boring.

Bryan Cranston’s got a lot on his plate. He’s starring in a Broadway play as LBJ, he just finished up “Breaking Bad,” he’s in every movie you see lately. Hard to remember the days when he was an incredibly silly dad in “Malcolm in the Middle.”

It’s easy to see what happened. He took one look at that bad wig he’s forced to wear, sighed heavily, reminded himself of the paycheck, said to himself, “It’s… large,” and phoned in most of the performance.

It’s probably not possible to film Ken Watanabe in a bad performance, but the director has managed to do just that. It’s hard to walk around in a lab coat, exuding terror, and having ever more terror register on your face, and then even some more terror. On your face.

The best “Godzilla” re-make to date is still the 2006 Nike commercial featuring the Godzilla-sized Charles Barkley playing Godzilla in one-on-one hoops. He was kind of a fun toy. See, Godzilla functions well at the two extremes: either as a bad monster or a good toy basketball opponent.

It’s when you have him save San Francisco as a misunderstood, bug-baking hero with some residual Hiroshima anger issues that it gets tedious. Save the bucks, watch Sir Charles vs. Sir Lizard on YouTube for free.