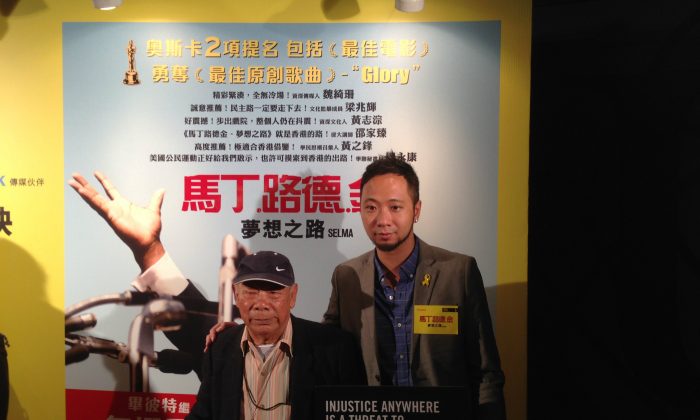 HONG KONG—Five days after rapper Common sent a shout-out to the Hong Kong pro-democracy demonstrators during an Oscars acceptance speech, Selma opened to a full house in the city.

“The spirit of the civil rights movement and the song spells out the spirit that we must persist in. In the end, we will have victory, and we will have glory.”
— Benny Tai, Occupy Central leader

Before the movie screening, Reverend Chu spoke briefly about Dr. King’s life and the civil rights movement in the United States at a press event just outside the theater.

Later, Ken Tsang, who was dragged to a dark corner and beaten up by seven police officers in the first weeks of the protests—an incident caught by a local broadcaster—posed for cameras with a sign that read: “Fear not violent oppression on the road to democracy.”

Other activists also had their pictures taken with that sign, and another with the Dr. King’s quote: “Injustice anywhere is a threat to justice everywhere.”

In the theater, some Occupy protesters and members of the audience held aloft yellow umbrellas—the symbol of Hong Kong’s pro-democracy campaign, which is known as the Umbrella Movement.

The Umbrella Movement was back briefly in the international spotlight at the Oscars on Sunday when it was mentioned by rap artist Common in his acceptance speech for the Best Original Song, Selma‘s theme song “Glory.”

Common said that the spirit of the bridge in Selma, Alabama which Dr. King and civil rights protesters marched lives on today in people around the world, including “the people in Hong Kong protesting for democracy.”

Social media in Hong Kong and China exploded after Common’s comments. Hongkongers applauded the Oscar nod on social media, while mainland Chinese slammed Common for “being political” on Weibo, the Chinese Twitter-like platform.

On Friday’s Selma premiere, key Occupy activists expressed optimism and a desire to continue fighting for democracy in Hong Kong.

“The spirit of the civil rights movement and the song spells out the spirit that we must persist in,” Benny Tai told Epoch Times. “In the end, we will have victory, and we will have glory.”

“After the demonstration areas were cleared up, Hong Kong people have been trying different ways and methods to fight back and do something,” said Tsang.

“Nobody steps back or stays behind,” Tsang continued. “The game is not over.”