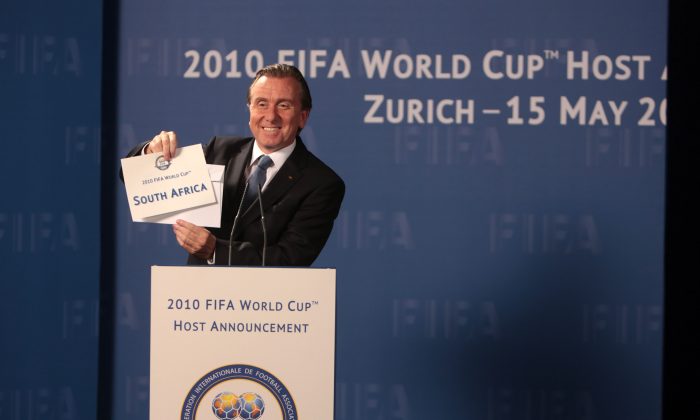 A Glance at Thursday’s Developments in FIFA Investigation

Sepp Blatter said he has started working on cleaning up soccer’s governing body after U.S. indictments of 14 people, including current and former members of FIFA, on corruption charges. He tweeted a photo of himself and said he was “working hard on reforms” after meeting with audit panel chairman Domenico Scala “to establish a framework for action and a timetable” for his final months in office. Blatter has said he is resigning once a successor can be elected.

South African authorities opened a preliminary investigation into World Cup bribery allegations. In the U.S. indictment, senior South African bid officials and the government were accused of channeling $10 million through FIFA to some of its top executives as bribes for them backing the country’s bid to host the 2010 World Cup.

Military intelligence agents have raided the headquarters of the Venezuelan Football Federation to gather evidence for a criminal investigation. The organization’s 68-year-old former head, Rafael Esquivel, was detained in Switzerland last week along with six other FIFA officials accused of taking bribes.

Australian police said they are investigating corruption claims surrounding the country’s failed bid for the 2022 World Cup. Australia spent about $40 million trying to win hosting rights but received only one vote when Qatar secured the rights. “We ran a clean bid,” said the country’s soccer association chairman, Frank Lowy.

Qatar Foreign Minister Khalid Bin Mohammad Al Attiyah said racism was behind the allegations that his country was wrongly awarded the 2022 World Cup. “Unfortunately, there are some parties that cannot swallow the fact of an Arab and Muslim country hosting this competition.” The British government said it was ready to step in as host if the tournament is stripped from Qatar.

No FIFA sponsors have jumped ship so far, issuing only sternly worded statements and calling for change. Big money is at stake, with FIFA saying sponsorships generated $1.6 billion in revenue in its 2011-14 cycle. More than 3.2 billion people are estimated to have viewed the 2014 World Cup — unparalleled global reach for advertisers.

FIFA said it wrote off a $5 million loan to Ireland in compensation for missing the 2010 World Cup after Thierry Henry’s controversial handball set up the winning French goal. The payment, initially a loan, was not disclosed following the 2009 playoff game, which France won to reach the finals in South Africa. The cash from FIFA was disclosed by Football Association of Ireland head John Delaney. FIFA says it granted the loan to end “any claims against FIFA,” but it would have to be reimbursed if Ireland qualified for the 2014 World Cup.

A movie largely paid for by FIFA and trumpeting its glories is set to open Friday in a handful of U.S. theaters and on video-on-demand. “United Passions” is a $30 million production starring Tim Roth as Sepp Blatter. It casts FIFA’s history and its leaders in a glowing light — just as hard reality is crashing down on an organization long viewed as a bastion of corruption.